As soon as possible, be sure to add the email address techletter@madhedgefundtrader.com to your white list or the list of trusted email addresses. And tomorrow, if you do not see your email, check your spam and junk folder to make sure it was not marked as junk mail.

How about if I told you there was one stock that captured ever major trend in technology today?

That would include the cloud, the computing power therein, cloud storage, virtual reality, and the exponentially increasing speed of broadband networks.

Now, how about if I told you that such a stock traded not only at a discount to the market, but is a bargain compared to other peers in its sector. It is even cheaper than average multiples in mundane industries like industrials and beverages.

I might even entice you further by pointing out that the shares have gone nowhere for two months, enduring a sideways “time” correction when the entire rest of the tech area has been on fire.

How about a company that is getting a massive tailwind from the cheap US dollar and the Bitcoin cryptocurrency boom.

You would think that such a company would be impossible to find in the ninth year of a bull market, especially one that has been focused on technology.

But you would be wrong.

It also builds NAND flash memory head to head against Japan’s Toshiba and America’s Western Digital (WDC). Intel (INTC) is a peripheral player in the field through a joint venture with (MU).

The key to understanding Micron is that this is not your father’s (MU). After the Dotcom bust, the company under invested in R&D and fell behind the pack. It has since addressed that management error. The stock market noticed two years ago, causing the share price to explode.

The DRAM industry itself has undergone a major transformation. When I covered the industry during the 1980’s DRAM’s became commoditized, giving undue advantage to companies with the lowest cost of capital, which turned out to be Japanese.

That’s when Intel made its strategic withdrawal out of DRAM’s to focus purely on microprocessors. The industry was later taken over by lower cost South Korea, which continue to dominate today.

Some 20 years ago, DRAM was a PC driven industry, making it slave to the consumer spending cycle. Thanks to the “siliconization” of American industry DRAMS are not found everywhere.

Servers are 30% of the market, and cell phones another 20%. The rest can be found in a plethora of electronic goods and cars. These days, you can’t swing a dead cat without hitting a raft of DRAMS. The market has grown enormously.

Here is the real sweet spot for investors. While demand for chips has growth by leaps and bounds, the number of manufacturers has remained the same for over a decade. The rest have disappeared thanks to a relentless round of mergers and takeovers.

Hugely increasing demand in the face of shrinking supply. It sounds like a winner to me.

The really great thing about this set up is that new customers will pay anything to get more chips. When Alphabet (GOOGL), Amazon (AMZN), or Facebook (FB) need a new server farm they don’t exactly quibble over the price of DRAM’s because their downstream profits are so enormous.

DRAMS and NAND are notoriously cyclical industries. They are great to own in healthy economies, but awful to be near during recessions.

If you don’t believe me, check out the long-term chart below, which had the share price flirting with pennies at the 2009 bottom. They had chapter 11 written all over them.

So nine years into this economic recovery, there is more than a little hesitation about the sector.

Except that this time its different.

From what I am hearing across the technology space, this cycle will run much longer than anyone expects.

For a start, the next downside won’t be so bad either. The next recession certainly won’t be as bad as the Great Recession.

DRAMS and NANDS have also evolved from a discretionary to a non-discretionary product. During the last recession, a weak economy caused consumers to delay purchases of new PC’s an TV’s.

How many will turn in their iPhones, scale back there broadband, or buy dumbed down chip free cars during the next one. Not many I think.

That makes DRAM and NAND manufacturers much more stable companies to invest in.

After Sanjay Mehrotra, the fresh faced CEO of Micron Technology, recently took over, the newly crowned CEO has had Micron running perfectly on all cylinders.

Delve into the numbers deeper and they are absolutely stunning. In fact, the biggest headwind at Micron is that DRAM PC sale volume had a slight quarterly decline due to higher value- added market sales in server DRAM’s.

This is not surprising since the bulk of DRAM chips are migrating towards the embedded business unit which recorded a 44% increase in revenue YOY, driven by insatiable demand across all segments. Particularly, automotive and IoT segments outperformed as big tech companies traverse into the development of autonomous car technology and creating a smart home for consumers.

If that doesn’t tickle your fancy, then what about the cloud portion of the business which is the strongest growth driver and has more than doubled in the past year?

Cloud is all the rave these days and it is not shocking that companies exposed to the cloud, like SalesForce (CRM) and Red Hat (RHT) are reaping all the benefits.

Investors attempting to absorb what fuels Micron will be chuffed to discover that DRAM chips represent around 65% of their total revenue and around 30% by NAND revenue creating a mix of high quality solutions for all types of customers.

Micron officials have consistently referred to the DRAM pricing environment as “firm”and this was corroborated by the Chinese authorities who set in motion an investigation the last week of December 2017 to investigate potential “price fixing” in the DRAM and NAND spot prices.

In truth, the molten hot increases in chip prices reflect the strong global demand for DRAM and NAND chips. Demand is growing a consensus 20-30% per year and a shortage of inventory is causing prices to gap up.

The investigation by the Chinese economic regulator coincided with another jump in DRAM prices at the end of 2017 boding well for Q1 2018 earnings.

Stripped to bare essentials, a strong correlation between DRAM spot prices and Micron’s share price persists. To add fuel to the bonfire, DRAM chip supply is controlled by only 3 companies; Micron, Samsung, and SK Hynix. All other smaller players have been flushed out.

Much can be attributed to the breakneck growth of smartphones, both the low and high end, as the huge amount of applications they perform now require substantially more DRAM chips than ever before.

This was extremely evident in 2017 where Apple cornered the NAND market for their iPhone X, purchasing 17% of the entire global NAND supply. The tightness in the chip markets resulted in hoarding by tech companies afraid that diminished supply would affect their production chain.

Companies requiring chips started purchasing more than they needed because delays could be weeks to their end product if they under bought. As AI capability integrates into high-end smartphones, the DRAM capacity required for smartphone will continue picking up to the 4-6 GB level.

Other products such as smart TV’s, set-top boxes, gaming consoles, crytpo mining, and voice AI devices will also see strong growth in 2018. The transformation into voice AI is evident with micron chips acting as the vodka for the after party.

The overwhelming bullishness manifests itself in total revenue up around 100% YOY.

The firepower is on display with shipments of the 12 gigabits per second GDDR5X, the industry’s fastest DRAM chip.

The results have been anything but disappointing. The all-important bit growth per wafer which influences memory capacity has surged upwards 40% YOY. This allows Micron to pack more heat into the chips they produce.

When you look a little deeper into their chip development, the DRAM center of excellence also achieved a 6% quarterly cost reduction per bit and the ASP (Average Selling Price) increased 14% in just one quarter and is even higher at the beginning of 2018.

If you extrapolate the cost reductions to a trailing 12-month period, the cost per bit has dropped by 30%. According to Lee Pei-ing, president of Nanya Technology, DRAM prices are expected to elevate further in Q1 and Q2 2018.

This company has one of the cleanest balance sheets around and is flush with cash. The semiconductor space as a whole is inexpensive. Without anyone noticing, Micron has suddenly become integral to everyone’s daily lives.

To learn more about Micron Technology, please visit their website at https://www.micron.com 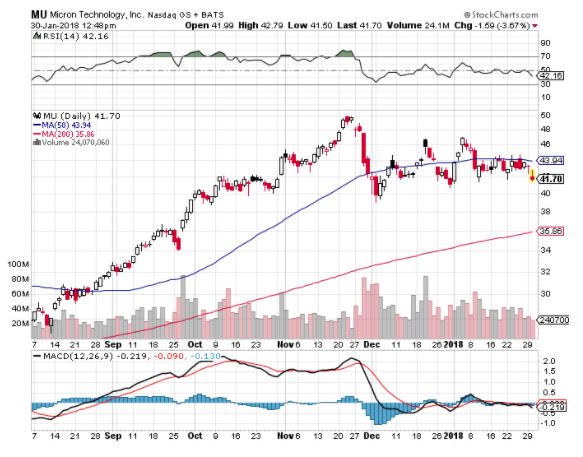 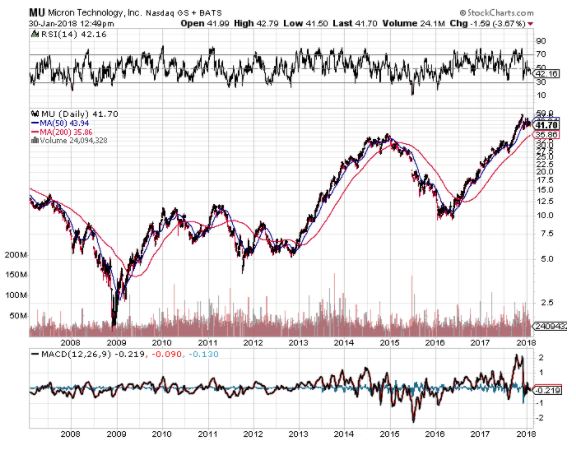 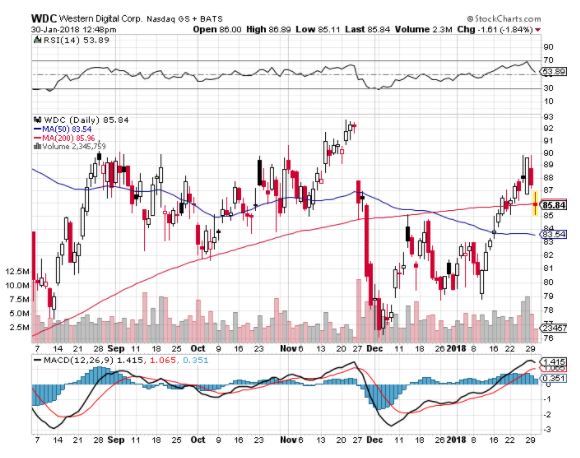 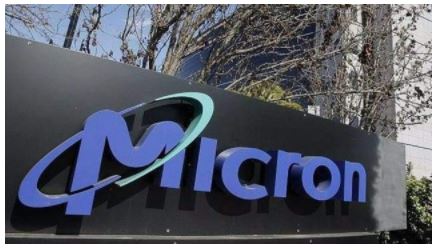 The Death of the High Yield Investment
Scroll to top