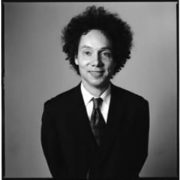 I spent an evening with the New Yorker magazine columnist, Malcolm Gladwell, author of The Tipping Point, Blink, and Outliers, and probably the most prolific publisher of original, consensus challenging ideas today.

Half English and half Jamaican, the preeminent challenger of clich?s and stereotypes was himself a clich? and a stereotype. He wore the standard issue New York intellectual?s blazer, pressed shirt, blue jeans, and loafers, to compliment his gaunt face and conspicuous afro.

His latest book challenges the myth of meritocracy, that luck is a bigger factor in success than privilege or education, and that, in fact, all meritocracies are rigged. Bill Gates built Microsoft not by being brilliant, but by having the good fortune to be raised by a family who could send him to one of the few Seattle high schools that then had a computer program. The Beatles made it only because they practiced more than any other group in history.

The falling crime rate since the seventies was not the result of a series of new, tough anti-crime laws, but the removal of lead from gasoline in 1973, which literally drove young inner city dwellers violently insane. Successful hockey players are almost exclusively born during the first three months of the year, enabling them to beat the crap out of younger, smaller competitors in their junior years.

It is cheaper to deal with the homeless than ignore them, because of the massive drain they create on the public health system. He cited the infamous example of the drunk, ?Million dollar Murray,? who single handedly drained the budgets of Reno, Nevada?s emergency rooms. Gladwell?s arguments may not be accurate, or even right, but he certainly forced you to look at problems from a new perspective. This I value highly.

The One Economic Indicator You Can Rely On
Scroll to top