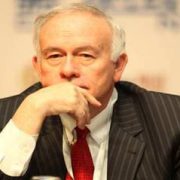 No one can explain the most complex economic and monetary issues in a simpler, more homespun fashion than former governor of the Federal Reserve, Bob McTeer. He is known for carrying around two yardsticks, one slightly longer than the other, to demonstrate to your average guy the monthly changes in employment.

Bob argues that the Fed is getting a bad rap today. Ben Bernanke?s quantitative easing is neither inflationary, nor causing the collapse of the dollar. This ?money printing effort? is not actually printing any money. The $3 trillion QE executed so far was designed to buy mortgage-backed securities to bring liquidity back to the market place. It then enabled the purchase of a further $600 billion in Treasury securities to prevent a double dip recession. On top of this, the Treasury piled the $700 billion TARP to recapitalize the major banks. All three of these programs were wildly successful.

As a result, the Fed balance sheet has grown from a pre-crash $800 billion to $3.6 trillion. Normally this would be inflationary, but it is not this time, as all of the extra money is being tied up with excess reserves at the banks. The proof of this is that the money supply, M2, is growing at a very modest rate, barely enough to accommodate the population growth. Without the Fed programs, the monetary base would have fallen off a cliff.

The challenge going forward is for the Fed to unwind its balance sheet at the same rate that the banks start paring back excess reserve through more aggressive lending. Too slow, and the Fed risks inflation. Too fast, and it risks falling back into recession. After the end of QE the Fed is likely to maintain a neutral stance, rolling over maturing debt, instead of paying it down. They may never sell their bond hoard.

Although it appears that the dollar is in a free fall in the foreign exchange markets, it is in fact at the same level as it was before the financial crisis. All it has really done is given back its flight to safety bid. The dollar is really a function of our international balance of payments and global interest rate differentials.? Bob feels that the next big move in the greenback is down.

McTeer points out that the Fed has been a huge cash cow for the Treasury, and ultimately, the taxpayer. So far, it has taken in more than $200 billion in profits. The TARP funds paid a 5% preferred dividend and brought in tens of billions of dollars in profits from the banks, General Motors, and AIG.

Bob views Obama?s $900 billion stimulus package as ?an attempt to shoot a hog with a shotgun.? The big problem is that businesses view such programs as temporary and act accordingly. Permanent changes to government policies get you more bang for the buck.

Bob, 70, was probably one of the last people in Texas to use a functioning outhouse. He grew up in rural Ranger, Georgia, the son of a truck stop operator, and his first brush with the real economy was pumping gas and picking cotton.? Somehow, he scored an economics degree from the University of Georgia, and moved on to work at the Federal Reserve.

He was named president of the Dallas Fed in 1991, and went on to pioneer the analysis of the impact of technology on the macro economy. Bob is simple, but he is no lightweight. Today, he serves as a chancellor of Texas A&M University, with 100,000 students.

Welcome to the Sack of Rome
Scroll to top