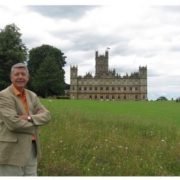 I decided to flee the madness in London for a day and visit some old friends in the countryside, the 8th Earl and Countess of Carnarvon.

The late 7th Earl was an early investor in my first hedge fund and I have kept in touch with the family ever since.

His grandfather, the 5th Earl gained fame and fortune from his co-discovery of King Tut?s tomb in Egypt?s Valley of the Kings in 1922.

His early death, shortly thereafter, was the origin of ?The Mummy?s Curse? of depression era horror film fame. Many of his discoveries today make up the bulk of the Egyptian collection in New York?s Metropolitan Museum of Art, which the family sold to pay estate taxes.

Recently, the family has been renting out their 350 year old home, a 15-minute taxi ride south of Newbury in England, the spectacular Highclere Castle, for use as a film set.

The period drama series that resulted, ?Downtown Abbey,? unexpectedly became a blockbuster in the US where viewers, stupefied by endless low budget reality shows, were starved for quality, thoughtful content and adult writing.

It also sent 100,000 visitors a year their way, as well as $25 million in ticket fees. This windfall enables them to maintain the house and the magnificent gardens in immaculate condition.

The cash flow also allows them to ramp up the other family business, breeding racehorses for the queen. Portraits of past winners adorn almost every room.

After tea with my hosts and a personal tour of the estate, I picked up some tea towels for friends at home who worship this kind of thing. I also saw a display of some spectacular early Egyptian relics, which the family found bricked up behind a wall 60 years after the Met sale.

Given the huge reception by the viewing public, we can count on this drama to extend to six seasons, when it will then be syndicated for the rest of our lives. That works fine for the real life Carnarvon?s, who can now reinvest in even more thoroughbreds.