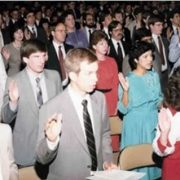 The coming Fourth of July celebration brings back memories of my late wife?s campaign to become an American citizen, who originally came from Japan.

Part of the process required a verbal quiz about US history and government. Our family spent a year energetically prepping her, with nightly grilling?s over dinner about the most obscure details of our independent form of government. She took cram courses and read a dozen prep books. By the time the test day came, she was a veritable constitutional law scholar, and any one of us could have qualified for a seat on the Supreme Court.

I drove her up to the Federal Building in Santa Rosa, California with the greatest trepidation. As the interviewing officer entered, the tension in the room was so thick, you could cut it with a knife. There were only three questions. No. 1: what colors are in the American flag (answer: red, white, and blue). No. 2: who was the first general of the US army? (Answer: George Washington). What are the three branches of government? (Answer: legislative, executive, and judicial).

I was stunned. All that work and she gets a test that a child could pass. Two months later we were in an auditorium on San Francisco?s posh Nob Hill with 1,500 others to be sworn in, which by tradition is led by an English applicant.

In 2008, the feds revamped the test to make it a little harder. Here are some sample questions. No. 1: who wrote the Articles of Confederation? (Answer: Alexander Hamilton). No 2: how many seats are in the House of Representatives? (Answer: 435 voting, six nonvoting). No. 3: How many amendments are there to the Constitution? (27)

Whoa! I?m not sure I could pass this test. Just as my SAT scores are probably too low to get into a decent school today, I?m not sure that I could meet the standard to become a citizen either. But over one million immigrants did last year.

Be Careful Who You Snitch On
Scroll to top