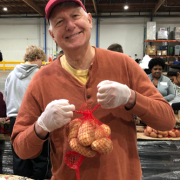 Occasionally, you have to tear yourself away from your screens and get involved in the real world.

So, a recent Saturday found me driving a carload of Boy Scouts to the Oakland Food Bank, a local distributor of free meals for the poor and homeless.

I learned a long time ago that nonprofits can be the most efficient participants in an economy. They have to or die because they can’t afford to pay anyone. Look no further than the Boy Scouts which runs a million-man national organization off of the $2 a month dues contributed by its juvenile members.

The Oakland Food Bank did not disappoint.

After a brief training video, I was ushered into a vast warehouse and bluntly asked “Corn or potatoes.” No management role here. I opted for potatoes, as my somewhat large hands were ideal for picking up several spuds at once.

What I ended up doing was breaking open 50-pound bags of potatoes fresh from the farm in Idaho and repackaging them into ten-pound carriers ideal for a single family. Others were inspecting sweet potatoes, corn, and peas. My task was made all the easier by a sound system blasting vintage sixties rock music.

It is amazing that the demand for free food is so great just across the bay, or one BART stop away from the world’s wealthiest and highest paid city. The Oakland Food Bank feeds 20% of Alameda County, or about 320,000 people a day. When the federal government shut down in January, the Oakland Food Bank was there sending truckloads of meals to the nearest base to feed military families.

I learned at the recent SALT conference in Las Vegas that 50% of the country could not pay an emergency expenditure of $500. This is where the food was going.

Certainly, the organization has grown a lot since the summer of love in 1967 when I stood in long lines to get doled a cup of stew of indeterminate origin by an organization then known as the “Diggers.” San Francisco was inundated by 100,000 kids that year, camping out in Golden Gate Park and totally swamping local services.

The Oakland Food Bank is now a massive outfit bringing together 17,000 volunteers donating 103,000 hours last year to feed the hungry. Even at minimum age, the value of that labor was $824,000. Semis from throughout the west were unloading thousands of pallets of food from farms, stores, and manufacturers.

A lot of the vegetables I saw were fine, they just did not conform to the picture-perfect version that Safeway requires for its produce aisles.

A market has sprung up to meet this. The food bank buys substandard potatoes direct from farmers at ten cents a pound, versus the $1.16 a pound in supermarkets. The China trade war has also made available millions of tons of foodstuffs available at throwaway prices, from rice to almonds, or corn and soybeans.

The work became more tedious when the music shifted to contemporary pop and I was sorting my 10,000 potatoes. But then the morning shift mercifully ended, and I was left to collect my far-flung scouts.

On the way out, our organizers told us we 60 volunteers had created 15,000 meals. Everyone cheered and headed for the door. I reminded my kids that if they didn’t go to college, they too would be doing this all day, every day….for $8 an hour and no benefits. They gave me a sober look.

We’ll be back again next month. I can’t wait to see what I get to sort next. 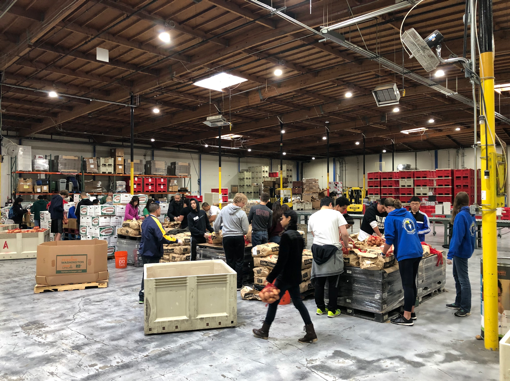 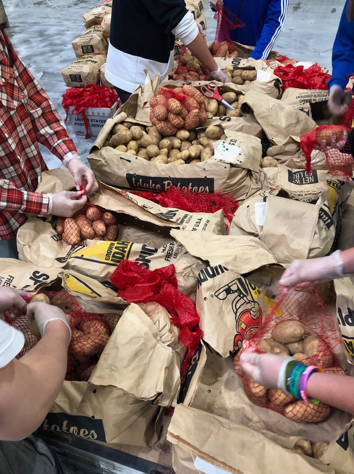 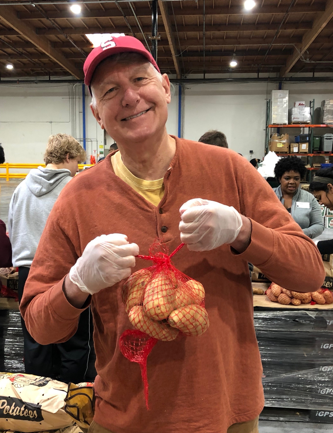