1) Since I am probably the only person in the country who once worked for Toyota, speaks Japanese, and worked in the White House Press Corps, and am therefore fluent in the ways of Washington, I feel obliged to comment on yesterday’s Congressional hearings on Toyota. There, Akio Toyoda, president of the Toyota parent and grandson of the founder and English speaking Yoshimi Inaba, president of Toyota Motor North America, Inc. faced the firing squad. It was the usual Congressional theater, with the member from Kentucky, where non union Toyota plants are located, listing off the firm’s charitable donations to the community, while the one from Michigan launching a vicious, no-holds-barred attack. The language spoken by the two Japanese couldn’t have been more different. Toyoda spoke the words of inherited wealth, of a ruling shogun, of privilege, and of condescension. Inaba talked like the hardscrabble warrior that he was, who spent 40 years clawing his way up the Toyota organization ladder. I think the entire crisis happened because Toyota management believed in their products to such incredible extremes that any criticism was viewed merely as the unhappy grumblings of competitors. Similarly, the quality of Japanese products became so ingrained in the minds of American regulators that they too fell asleep at the switch, giving the company a free pass on the rising tide of consumer complaints. On top of this, you can pile the Japanese cultural preference against sending bad news up the command chain. This is one reason why Japan lost WWII, and is why the suicide rate in the country is so appallingly high. When the bill finally came due, the price tag was 37 dead in acceleration accidents, and a witch hunt on national TV. Toyota’s management will make sure, literally on pain of death, that every product rolling off the assembly line from here will be models of engineering perfection. The stock has held up amazingly well so far, probably because it is mostly owned by strong hands, with few traders involved. Not only should you buy the stock when global markets return to risk accumulation mode, you should buy a Toyota car as well. It will be the only time in your life that you can find them at a discount. 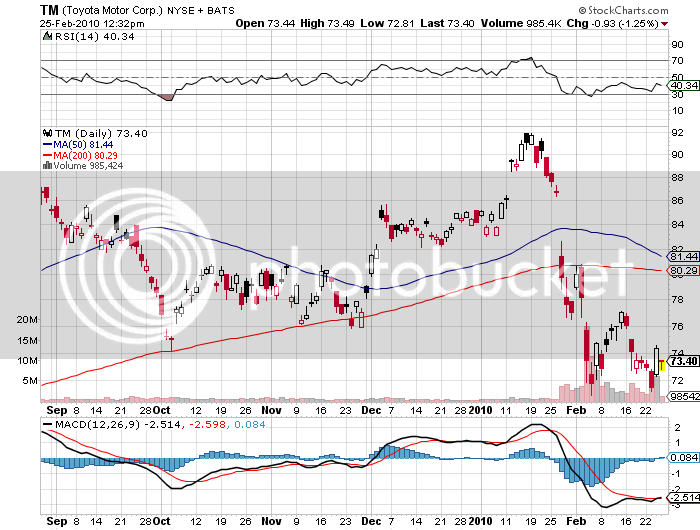 2) Since the run up to the Toyota hearings began, the palladium ETF (PALL) has dropped about 10%, giving up all of the gains that occurred after my January 27 story on the white metal (click here for the piece). The sell off happened because traders assumed the dent to Toyota’s reputation would mean fewer car sales, less demand for catalytic converters, and less need for palladium or platinum. The crazy thing about this logic is that those dumping Toyotas will buy a vehicle from another car maker instead, maintaining demand for catalytic metals at their current level. Maybe it was the wholesale flight from all hard assets that took the poor man’s platinum down. Watch your screens.

3)I just thought I’d repost my interview with Toyota USA president Jim Lentz in the wake of his testimony in front of congress this week. He looks like he aged about ten years since I saw him in November. In journalism they tell you to always be nice to people on the way up, because you meet them again on the way down. Now there are rumors of a criminal prosecution of Jim.

‘I spent an evening chewing the fat with James Lentz, the president of Toyota Motor Sales, USA, (TM) who let loose some incredibly insightful views on the long term future of the global economy. I have been following Toyota for 35 years, hobnobbing with senior management, touring their factories in Japan, and driving their marvelously engineered products. It is far and away one of the best run multinationals, with awesome research resources, spending $9 billion a year on R&D, but are also one of the most secretive organizations on the planet. If the CIA only kept its secrets so well! Peak oil is going to hit in 2017-2020, making gasoline prohibitively expensive. Toyota is racing to get as many hybrids out there as possible by then, converting a Mississippi factory from Highlanders to the hugely popular Prius. In Japan there is a backlog of 200,000 orders for these cars, and Toyota makes a profit on every one. The plug in version of this car will be fleet tested in the US next year, and sold to the public from 2012. But hybrids, which reduce emissions by 70%, compared to conventional cars, are just a transitional solution until the technology for hydrocarbon free alternatives, like electric only and fuel cells, mature in the 2020’s. The US car market will come in at 10 million units this year, but will rebound to 15-16 million units by 2015. At 9.3 years, the average age of the American car fleet is the oldest on record, and replacement demand will be huge. New car based consumer societies are also emerging in Argentina, Mexico, Thailand, and Indonesia. The American car industry, accounting for 4% of GDP and 10% of total employment, isn’t going away, as many fear. However, it will evolve beyond current recognition. Toyota is certainly putting its money where its mouth is, with an $18.2 billion investment in 14 American factories, directly employing 34,000, and indirectly another 380,000. Long term, I love this stock. James has worked for Japan’s largest car maker for 26 years, but still can only order one beer in that impossible pictographic language. By the time the evening was out, I made sure he could order a second, and a third, in Japanese.’

4) The US Department of Housing and Urban Affairs certainly peed on the parade of those blowing horns and banging drums because they believed the real estate market was recovering. Seasonally adjusted new home sales for January came in at a paltry 309,000, the lowest figure on record, and a gut wrenching decline of 11.2% from the previous month, versus the expected gain of 3.8%. It just doesn’t get any worse than this. Sure, the horrendous weather in the Northeast was a factor. But the harsh reality is that, with enormous federal and state tax incentives soon to expire, the life support that kept this industry alive is about to see the plug kicked out. Once the Fed ends the TALF, mortgage rates are going up, even is overnight rates remain rock bottom, putting another stake through the heart of this market. Unemployment is going to stay pitilessly high, sending consumer confidence into another death spiral. For what it’s worth, I never bought the whole green shoots thing, viewing the enormous gains seen in stocks over the last year as nothing more than one giant dead cat bounce. The XHB, the homebuilders ETF, held up remarkably well. But let’s face it, the life has already been sque
ezed out of this sector. There is nothing left to short. There are going to be so many great trading opportunities this year that you shouldn’t even think about tying your capital up in a house. Rent, don’t buy.

‘It’s very difficult to navigate a business through a paradigm shift. You must hard wire your system to second guess all the time, questioning what is next, and then what is next. You’ve got to retain optionality for both investment portfolios and the business your run to navigate this well,’ said Mohamed El-Erian, co-chairman of the bond house PIMCO.