1) The January ISM non-manufacturers index, which accounts for 80% of the economy, dropped from 54.4 to 41.9, the lowest level since the terrorist attacks of 9-11. It's as if someone turned the lights off on the economy. The Dow dropped 560 points from yesterday's highs on the news. The market has given up nearly half of the gains from the MLK low two weeks ago. The market would have dropped more, but the Super Bowl winning New York Giants football team had their ticker tape parade down Broadway today.

2) A Federal Reserve survey of senior bank loan officers showed that one third of all US banks and two thirds of foreign banks have tightened up commercial lending. When loans are going through they are on wider spreads over Treasuries. The most affected are small community oriented banks with large exposure to commercial real estate lending in areas like California where prices have fallen the most.

3) Google dropped below $500 in fears of the competitive threat from Microsoft/Yahoo. It is down a third from its peak of $750 and is a buy here.

4) The futures markets are now discounting a 100% chance of a 0.25% interest rate cut at the next Fed meeting in March.

5) United Airlines will start charging $25 for a second checked bag. The plan will generate $100 million in income, but is a terrible idea from a marketing point of view.

6) Even if we don't have a consumer lead recession, it will feel like it, with growth decelerating from 5% to 0% in one quarter.

Quote of the day: 'Losing your credit rating is like losing you virginity. It is easier to lose it than to get it back.'

The first leg of the bear market is now complete, with the S&P 500 ($SPX) down 21% for its October top of 1586. Expect a period of digestion and range trading to follow. You can cash in on this by selling the June S&P 500 1200-1450 strangle. This involves going short puts on dips and going short calls on rallies. If the market stays in the range I expect profits to drop straight through to your P&L as the time decay accelerates. It's like having a rich uncle write you a check for your monthly allowance. If we break out of this range you can always hedge yourself with futures. Use volatility spikes to 30% to scale into these positions. 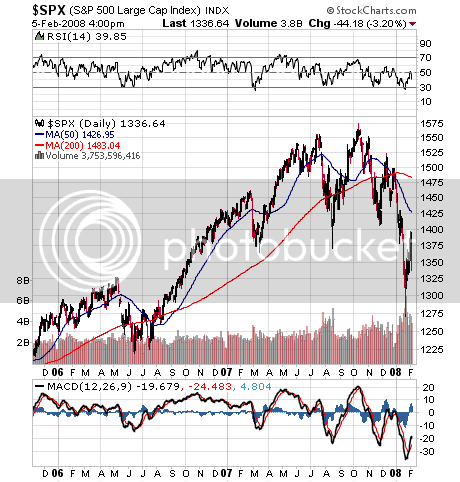