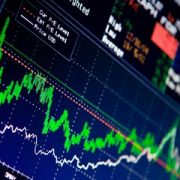 Only execute with a limit day order for the spread in the middle market. If your order doesn?t get done, then increase your limit bid in 10 cent increments until you get filled. Prices are all over the map today. Don?t enter market orders on pain of death. You?ll lose your whole profit.

The recent route in the stock market has taken the stuffing out of Apple, dropping the shares by a mind numbing $120, or 18.7% from the April high. Apple now has a PE multiple of 8X and is growing somewhere in the neighborhood of 100% a year. The next blockbuster earnings report is only two months out.

Here are the calulations for the trade:

From a tactical point of view, this gives us a core long to trade against, something I was lacking in Q1. That means I can use rallies to write calls against my existing long $400-$450 call spread, or sell short stock against it, taking in additional incremental income.

I have been running the numbers on this trade every day for the past two months, and watched the potential returns steadily climb. The stock market sell off has driven implied volatility for options through the roof, increasing the return on the spread. As of this morning, the potential profit is so large for a deep out of the money play on a company with great fundamentals that I couldn?t resist. So out went the trade alert.