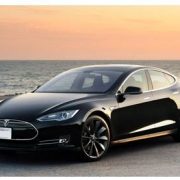 Damn! I should have cut a commission deal with Tesla (TSLA) before I published my story on their amazing electric vehicle a few days ago (click here for ?My Take on the Tesla Tiff?). I have since received a dozen emails from readers telling me they have jumped on the waiting list with a $5,000 deposit, which I understand has been shortened to five months.

In the meantime, the company?s mercurial CEO, the South African programming genius, Elon Musk, has announced the firm?s Q4, 2012 earnings. The loss came in larger than expected at 65 cents a share, versus an expected 53 cents. But revenues jumped from a projected $298 million to $306 million. Musk is confident that Q1, 2013 will be profitable, as will the full 2013-year, and that a 25% profit margin will be realized.

Much of the loss was due to massive overtime wages for workers, with many clocking 70-hour weeks as they struggle to meet overwhelming demand. There are still 6,000 on the waiting list for the new Model S sedan. Musk says that the company is on target to manufacture 20,000 vehicles this year. Most of the orders have been for the high end, 85kWh, 300 mile range vehicle that starts at $72,400.

I have been deluged with questions from readers about the car?s performance. Here are the answers to a few:

The times to obtain a fully charged battery from flat that I have recorded from various power sources are:

All public charges, from Whole Foods, public garages, and movie theaters, etc., are provided for free by a company called ChargePoint (click here for their website). There you can view their national network of 10,954 public charging stations. When I visit my home at Lake Tahoe, where overnight temperatures go well below zero, the company recommends that I keep the car plugged in overnight, just to keep it warm.

No, I am not indirectly running this car on high polluting coal. Notice that the lights in your home turn on in the middle of the night, even though no one usually wants power then. Utilities must generate massive amounts of power that gets wasted in order to maintain ?grid integrity?, a network that makes electricity available to us 24/7.

How much is wasted? Enough to run all 250 million cars in the US on electric power. This is why they give it away nearly for free if you charge between midnight and 7:00 AM (4.7 cents/kw versus 40 cents in my case). I am simply using power that has already been generated that otherwise would go unused.

Tesla advertises a maximum range of 265 miles, which is based on an EPA five cycle testing standard. But you can really get 300 miles with conservative driving, which is more than your bladder can stand. One 45-minute charge at Harris Ranch gets me from San Francisco to San Diego, some 500 miles. For longer trips I fly my own plane, go commercial, or drive my other car.

I?m sure more questions will come in, and I will answer them periodically. Or you can call Tesla directly at 877-798-3752.

As for the stock, I wouldn?t touch it here. It is far too expensive for me. These kinds of new technology stocks tend to maintain enormous premiums in the early days because of the cache and ?coolness? of their products. You saw the same thing with Apple (AAPL). I have no doubt that the company will be a huge success. But at $34 a share, it is far ahead of delivering actual financial results for investors.