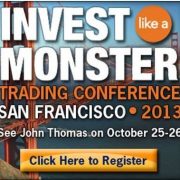 I am pleased to announce that I will be participating in the Invest like a Monster Trading Conference in San Francisco during October 25-26. The two-day event brings together experts from across the financial landscape that will improve your understanding of markets by a quantum leap and measurably boost your own personal trading performance.

Tickets are available for a bargain $399. If you buy the premium $499 package you will be invited to the Friday 6:00 pm VIP cocktail reception, where you will meet luminaries from the trading world, such as tradeMONSTRS?s Jon and Pete Najarian, Guy Adami, Jeff Mackey, and of course, myself, John Thomas, the Mad Hedge Fund Trader. All in all, it is great value for money, and I?ll personally throw in a ride on the City by the Bay?s storied cable cars for free.

Jon Najarian is the founder of optionMonster, which offers clients a series of custom crafted computer algorithms that give a crucial edge when trading the market. Called Heat Seeker ?, it monitors no less than 180,000 trades a second to give an early warning of large trades that are about to hit the stock, options, and futures markets.

To give you an idea of how much data this is, think of downloading the entire contents of the Library of Congress, about 20 terabytes of data, every 30 minutes. His firm maintains a 10 gigabyte per second conduit that transfers data at 6,000 times the speed of a T-1 line, the fastest such pipe in the civilian world. Jon?s team then distills this ocean of data on his website into the top movers of the day. ?As with the NFL,? says Jon, ?you can?t defend against speed.?

Jon started his career as a linebacker for the Chicago Bears, and I can personally attest that he still has a handshake that?s like a steel vice grip. Maybe it was his brute strength that enabled him to work as a pit trader on the Chicago Board of Options Exchange for 22 years, where he was known by his floor call letters of ?DRJ.? He formed Mercury Trading in 1989 and then sold it to the mega hedge fund, Citadel, in 2004.

Jon developed his patented algorithms for Heat Seeker? with his brother Pete, another NFL player (Tampa Bay Buccaneers and the Minnesota Vikings), who like Jon, is a regular face in the financial media.

In order to register for the conference, please click here. There you will find the conference agenda, bios of the speakers, and a picture of my own ugly mug. I look forward to seeing you there.

Apple is Ready to Explode