2) What's Next for Gold? Now that gold has hit my target for the year of $1,300, it is time to pause and reassess. A nice reversal may take place after the November election, especially if the Republicans take the house. While their promises to reduce the deficit are gold negative, the fact is that their tax cutting proposals are more likely to lead to bigger deficits, not smaller ones. With only 18% of the Federal budget discretionary, and the rest tied up in defense spending and entitlements, the amount of spending cuts they are proposing are impossible. Even if we eliminated all discretionary spending, the government would still be hugely in the red.

Another factor that could lean on gold prices would be a rise in capital gains taxes from 15% to 20% passed by Congress during the lame duck session. That would trigger a stampede to take profits in all asset classes before the year end. With gold up 35% this year and at the top of the list of performers, it could get hit with a serious bout of profit taking.

None of this changes the long term fundamental case for gold. The current environment of negative real interest rates is the dream scenario for the yellow metal. The last time this happened was during the seventies, when gold moved from $34/ounce to $900. As long as interest rates and stay low, you can expect gold to continue its rise. Goldcorp (GG) CEO, Charles Jeannes, says he believes we will see a $1,500 print sometime '?in the next one or two years.' Goldcorp is one of the largest gold producers in the world.

Although not many have noticed, the re-emergence of inflation has already started. Anyone who looks at the blistering prices rises of wheat, corn, soybeans, sugar, iron ore, coal, and other key raw materials can't look me straight in the eye and say there's no inflation. Of course the last place you will find it is in government statistics, a deep lagging indicator.

The Fall is always the peak demand time of year for the yellow metal, and the Fed's recent move towards QEII is likely to give the barbarous relic a shot of steroids. The only question here is whether a $100 pull-back starts here, at $1,350, $1,400, or even $1,500. When it does, you can expect a ton of buying waiting for it below from central banks, institutional investors, ETF's, and individuals alike. 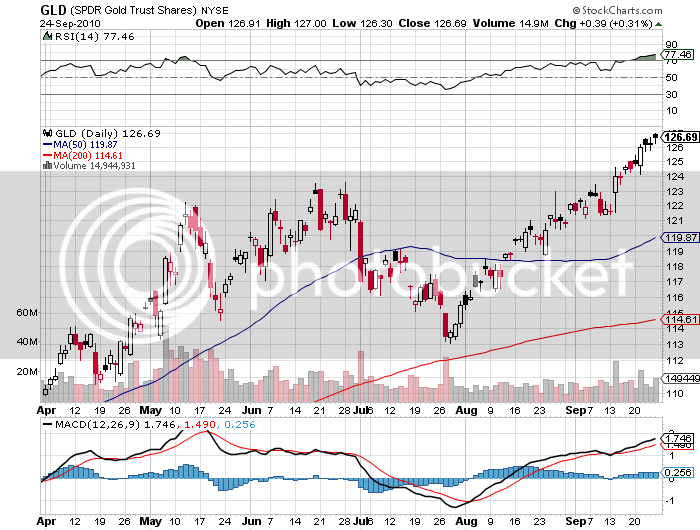