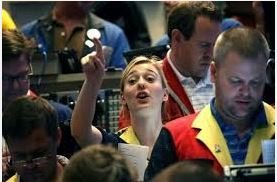 Take a look at the chart below for the S&P 500, and it is clear that we are at the top, of a top, of a top. How much new stock do you want to buy here? Not much. Virtually every technical trading service I follow, including my own, is now flashing distressed warning signals. Maybe we really were supposed to ?Sell in May and go away.?

All RSI?s are through the roof. We have not had a pullback of more than 3.2% in six months, the longest in history. It has been up 19 Tuesdays in a row. Some 67% of this year?s gains have been on Tuesdays, and 83% since the 2012 low. So buying Monday afternoon and selling Tuesday afternoon is the new winning investment strategy. It?s a day trader?s paradise. The market is clearly cruising for a bruising here.

A 5%-10% correction seems imminent. After that, we will probably power on to a new high by the end of the year. The Vampire Squid, Goldman Sachs, posted a 1,750 target for (SPY). Why not? Their number seems as good as any. Who knew that the top market strategist for the year would be perma-bull Wharton business school professor, Jeremy Siegel?

The smart money is sitting on its hands here, maintaining discipline, and waiting for better opportunities. It is also pounding away at the research, building lists of stocks to pounce on during the second half. It is still early, but here is my short list of things to watch from the summer onward.

Apple (AAPL) ? Rotation into laggards will become the dominant theme for those playing catch up, and the biggest one out there is Apple. Buy the dips now for a 25% move up into yearend. An onslaught of new products and services will hit in the fall, and the company is still making $60 million an hour in net profits. Look for the iPhone 5s, Apple TV, and new generations of the iMac, iPad, and iPods. It will also make its China play, inking a deal with China Telecom (CHA). The world?s second largest company is not going to trade at half the market multiple for much longer, especially while that multiple is expanding. Technology is the last bargain left in the market. QUALCOMM (QCOM) might be a second choice here.

MSCI Spain Index Fund ETF (EWP) ? Look for the European economy to bottom out this summer and recover in the fall. In the end, the Germans will pay up to keep the European community together. The reach for yield and the global liquidity surge will drive interest rates on sovereign debt down as well, accelerating the move up. Also, the more expensive the US gets, the more you can expect other parts of the world to play catch up. Spain is the leveraged play here.

iShares FTSE 25 Index Fund ETF (FXI) ? Now that the new Chinese leadership has their feet under the desk, look for them to stimulate the economy. China will play catch up with the US, which should start topping out by yearend. It is also an indirect play on the reviving Japanese economy, the Middle Kingdom?s largest foreign investor. Japan has gotten too expensive to buy, so consider this a second derivative play.

Proshares Ultra Short 20+ Year Treasury ETF (TBT) ? The Treasury market bubble is history, and it is just a matter of time before we break down from these elevated prices. Look for the ten-year bond to probe the high end of the yield range at 2.50%. I don?t expect Treasuries to crash from here, but you might be able to squeeze another 25% from the (TBT) in the meantime.

Citicorp (C) ? Look, the financials are going to run all year. Use the summer dip to get back into this name, the most undervalued of the major banks, and a hedge fund favorite. A multidecade steepening of the yield curve is a huge plus for the industry. Now that real estate prices are rising, some of those dud loans on their books may actually be worth something.