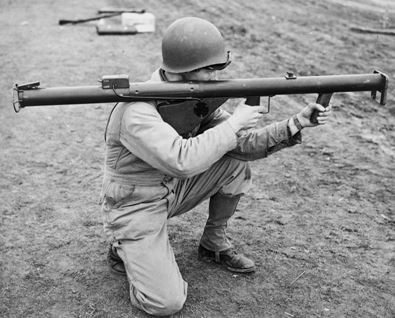 After remaining woefully behind the curve on European monetary policy, European Central Bank president, Mario Draghi, has finally leapt to the forefront.

Specifically, he has announced a package of measures designed to stimulate the beleaguered continental economy that includes generous doses of interest rate cuts and quantitative easing. In short, his has finally pulled that big bazooka out of his pocket that he has been threatening to use for years.

No, he?s not just glad to see you.

The markets were caught unawares of the central banker?s aggressiveness, a character quality that has been sadly lacking in the European leadership since the financial crisis began in 2008. One derivative of the package is to drive short-term European interest rates in to negative numbers. Yes, deposit overnight money in a European bank now, and you have to pay them to take it.

The goal is to punish savers and force them to invest farther down the risk curve, such as through buying stocks. It is a radical move that I have not seen since the mid 1970?s, when the Swiss National Bank was forced to do the same in the wake of the US dollar?s decoupling from gold.

However, depositors quickly got the message, and the negative rates were gone in months.

The move triggered an unrestrained and frenetic global stock market rally. Shares have been mired in a tedious, nerve wracking range for months, awaiting a trigger to break out to one side to another. It looks like this is it, and the new trend is northward.

It also helped that my friend, hedge fund legend David Tepper, gave the green light for stocks (SPY) in the aftermath of the ECB move. That alone was probably worth 80 points of today?s rally, and more in the days to come. All of a sudden, all signals are shouting go!

David?s logic is clear and simple, as he has explained to me in recent weeks. Bring Europe out of hibernation and online, and you get a major boost to global economic growth. Europe is both America and China?s largest export customer. All of a sudden, those US 4% GDP growth rates that I have been shouting about all year don?t seem so pie in the sky.

The ECB?s execrable behavior until now is explained away by their constantly underestimating the severity of the downturn and lacking the institutional tools to do any thing effective, such as an American Style US Treasury and Federal Reserve, with teeth.

Personally, I think they were all just a bunch of wimps. It?s a classic example of a camel being a horse designed by a committee.

I have noticed over the decades that if everyone agrees that a certain scenario is going to play out, it tends to accelerate. We have just experienced the summer doldrums over the last quarter. Is this the fall rally now?

It?s screamingly clear that this is only the opening act of move in the Euro (FXE) down to $1.27. But you don?t want to jump into the market right here. The traders who got this one right have been selling into this meeting since the beginning of March.

Mad Day Trader, Jim Parker, and I tried to short the (FXE) a few times above $137. But the time it spent up there was so fleeting, we couldn?t get the Trade Alerts out there fast enough. This is a year when you don?t chase trades, or you will be sorely punished. So we kept our discipline and stayed away.

That said any strength in the Euro should be sold into for the next several months. That window may already be opening. After diving on the news, the Euro then rallied hard as the early players took profits so they could take a long summer vacation. It was a classic ?buy the rumor, sell the news? move.

The currency isn?t the only way to play the ECB?s sudden conversion to religion. You can expect continental stock markets (EZU) to outperform the US for the rest of 2014, especially the long suffering southern European ones, the biggest beneficiaries of the ECB action.

If I am right in my assumption that US bond markets peaked last week, then so have emerging market shares (EEM). It might be prudent to take profits in those marginal markets, and plow the money back into Europe stocks (EZU).

All of a Sudden All Signals Are Flashing Go!