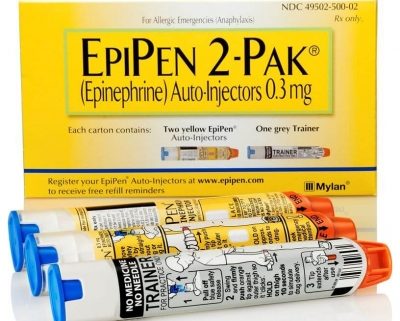 One has to be truly impressed with the selloff in biotech and health care stocks over the past year.

Since May, there were signs that life was returning to this beleaguered sector. Then Mylan decided to raise the prices of it’s EpiPen by 400% and it was back to the penalty box.

Let?s gouge poor small children who may die horrible deaths if they can?t afford our product. That sounds like a great marketing and PR strategy. NOT!

Once the top performing sectors of 2015, they went from heroes to goats so fast, it made your head spin.

What I called ?The ATM Effect? kicked in big time.

That?s when frightened investors run for the sidelines and sell their best stocks to raise cash. After all, no one wants to sell other stocks for a loss and admit defeat, at least in front of their clients.

It?s not that the companies themselves were without blood on their hands. Valuations were getting, to use the polite term, ?stretched? after a torrid five-year run.

It has been a performance for the ages.

If a financial advisor wasn?t in health care, chances are that he is driving for Uber in a bad neighborhood by now.

Then there was The Tweet That Ate Wall Street.

Presidential candidate Hillary Clinton made clear in a broadcast on September 21, 2015 that the health care industry would be target number one in her new administration.

Her move was triggered by an overnight 5000% price hike for a specialty HIV drug by a minor player in the industry.

Among the reforms she would implement are:

1) Give the government power to negotiate drug purchases with the industry collectively.
2) Allow Medicare to import drugs from abroad to encourage price competition (which I already do with my annual trips to Switzerland).
3) Ban drug companies from using government grants to pay for sales and advertising.
4) Set an out of pocket limit for drugs bought through Obamacare at $250 a month, thus ending customers? blank checks.
5) Set a 20% of revenue minimum which companies must spend on research and development.

She certainly got our attention.

Competition in the drug industry? Yikes! Not what the shareholders had in mind.

Raise your hand if you think Americans aren?t paying enough for their prescription drugs.

Yes, I thought so.

Drug company CEOs aren?t helping their case by flying to press conferences to complain about the proposals in brand new $65 million Cessna G-5?s.

Here?s the key issue for health care and biotech for investors. It all about politics.

Even if Hillary does get elected, the government is likely to remain gridlocked for another 4-8 years. The Democrats will almost certainly retake the Senate in 2016, thanks to a highly favorable calendar, and keep it for at least two years.

But the heavily gerrymandered House is another story.

With the current districting map, the Democrats would have to win 57% of the national vote for them to regain a majority in both houses.

That is a feat even Barack Obama could not pull off in 2008, when a perfect storm in favor of his party blew in.

A Hillary appointed liberal Supreme Court could bring an end to gerrymandering, but that is a multiyear process. Texas hasn?t had a legal districting map since 2000.

Even with Democratic control of congress, Hillary won?t get everything she wants.

Remember, Obamacare passed by one vote only after a year of cantankerous infighting, and then, only when a member changed parties (Pennsylvanian Arlen Spector).

That means few, if any, Clinton proposals will ever make it into law. If they do, they will be severely watered down and subject to the usual horse-trading and quid pro quos.

Beyond what she can accomplish through executive order, her election may be largely symbolic.

Therefore, the biotech and health care stocks are a screaming ?BUY? at these levels, provided you ignore Mylan (MYL), now the poster boy for corporate greed.

It?s a political call I can only make after spending years in the White House and a half century following presidential elections.

It?s easy to understand why these stocks were so popular, and are found brimming to overflowing in client portfolios and personal 401ks and IRAs.

We are just entering a Golden Age for biotech and health care.

Profit growth for many firms is exceeding 20% a year. Hyper accelerating biotechnology is rapidly bringing to market dozens of billion dollar earning drugs that were, until recently, considered in the realm of science fiction.

And we have only just gotten started. Cures for cancer, heart disease, arthritis, diabetes, AIDS, and dementia? You can take your pick.

Most biotech and health care stocks have given up all of their 2015 gains. Here is a chance to hoover up the fastest growing companies in the US at 2014 prices.

If you missed biotech and health care the first time around, you?ve just been given a second chance at the brass ring.

Here?s a list of five top quality names to get your feet wet:

Gilead Sciences (GILD) ? Has the world?s top hepatitis cure, which it sells for $80,000 per treatment. For a full report, see the next piece below.

Celgene (CELG) ? A biotech firm that specializes in cancer cures (thalidomide) and inflammatory diseases. It also produces Ritalin for the treatment of ADHD.

Allergan (AGN) ? Has the world?s third largest low cost generic drug business. In addition, it has built a major portfolio of drug therapies through more than two dozen acquisitions over the last decade.

Regeneron (REGN) ? Already has a great anti-inflammatory drug, and is about to market a blockbuster anti cholesterol drug that will substantially reduce heart disease.

HCA Holdings (HCA) ? Is the world?s largest operator of for profit health care facilities in the world.

If you want a lower risk, more diversified play in the area, you can buy the Health Care Select Sector SPDR (XLV). Please note that a basket of stocks is going to deliver a fraction of the volatility of single stocks.

Therefore, we have to be more aggressive with our positioning to make any money, picking call option strikes that are closer to the money.

Johnson and Johnson (JJ) is the largest holding in the (XLV), with a 12.8% weighting, while Gilead Sciences (GILD) is the fourth, with a 5.1% share. For a list of the largest components of this ETF, please click: https://www.spdrs.com/product/fund.seam?ticker=XLV.

The other classic play in this area is the Biotech iShares ETF (IBB) issued by BlackRock (click their link: https://www.ishares.com/us/products/239699/ishares-nasdaq-biotechnology-etf ).

I?ll be shooting out Trade Alerts on biotech and health care names as soon as I think the coast is clear.

Until then, enjoy the ride! 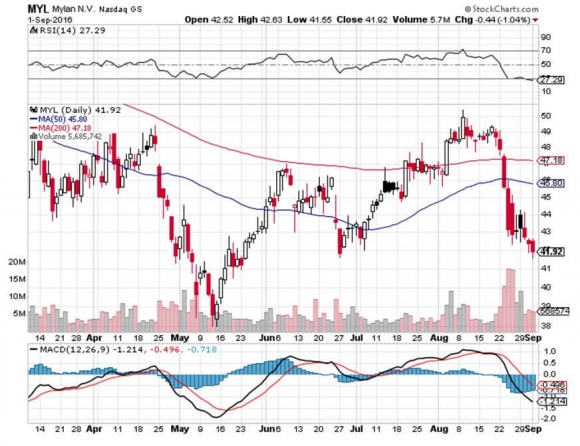 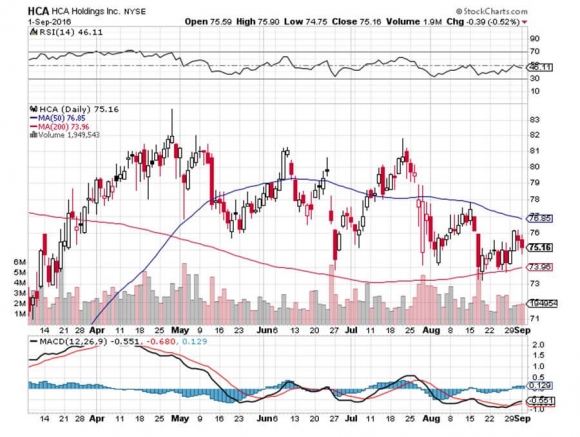 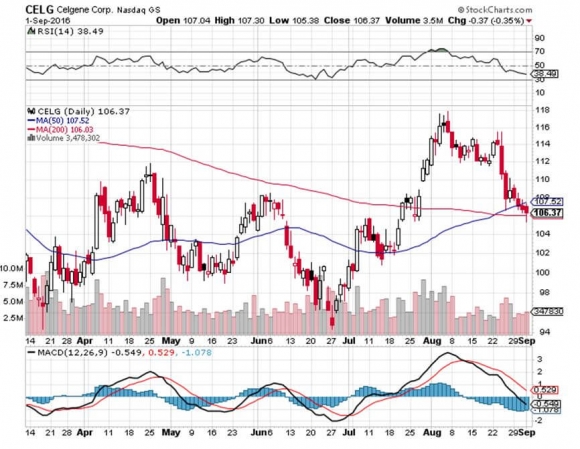 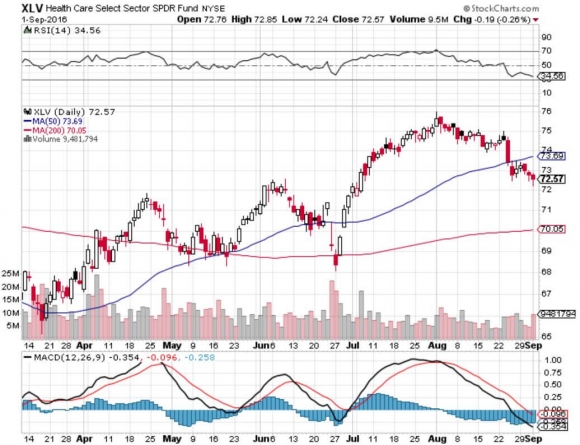 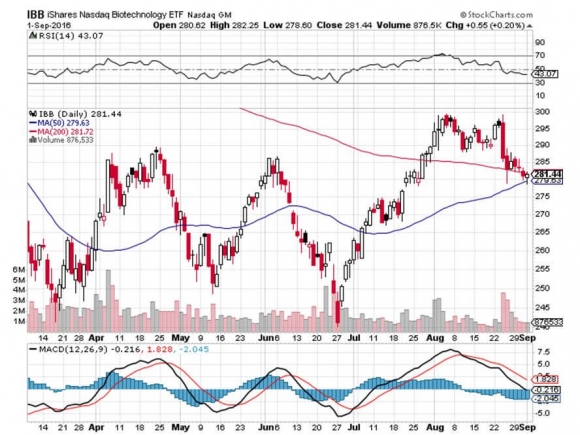 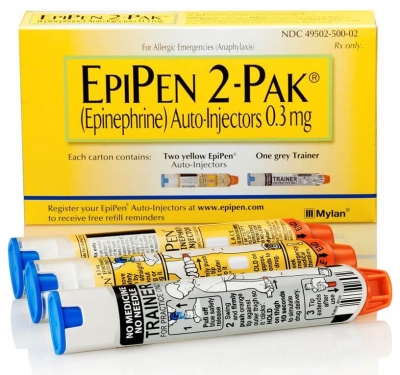 Say You Were A Biotech Investor, Did You?