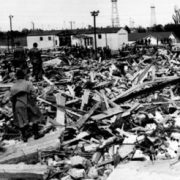 I am constantly asked if there are any ways investors can take advantage of the collapse of the natural gas market, where at $2.34/MBTU prices are plumbing decade lows. I have recently made good money buying puts on the ETF (UNG), but these are not for the faint of heart. They call this contract the ?widow maker? for a good reason.

You don?t want to touch the gas producing companies, like Chesapeake (CHK) and Devon (DVN), because prices are probably going to stay down for years. Good firms that benefit from the increased volume of gas pumped are few and far between. Unless you are a large consumer of this despised molecule, such as an electric power company or a petrochemical plant, it is tough to find a profitable niche.

However, there is one company that delivers a narrow rifle shot that could do extremely well in coming years, and that is Cheniere Energy (LNG). I first started following (LNG) a decade ago when I was still wildcatting for CH4 in the Texas Barnet Shale.

Back when natural gas was trading at a loft $5/MBTU, Qatar invested $50 billion in in developing its own substantial gas resources. The plan was to liquefy the gas at -256 degrees Fahrenheit in the Middle East, ship it to the US in a fleet of specialized LNG carriers, and have Cheniere convert it back into gas at its Sabine River plant for distribution to an energy hungry US market through the Creole Trail pipeline. It all looked like a great plan, and (LNG) shares traded up to $45.

Then ?fracking? technology came along and blew up the entire model. The discovery of a new 100 year supply of gas under our feet caused gas prices to crash from a post Amaranth peak of $17/MBTU down to $2/MBTU. Any plans to import LNG from the other side of the world were rendered utterly worthless. Chenier?s billion dollar investment in a gasification plant was now worth only so much scrap metal. (LNG) shares plumbed low single digits as the firm flirted with bankruptcy.

Enter China. The Middle Kingdom?s voracious demand for energy in this recovery has caused the price of oil to soar from a 2008 low of $30 to $110. Despite accounting for an overwhelming share of the world?s new energy purchases, Chinese cities are suffering from brown outs due to power shortages. This is why China is resisting immense American pressure to quit buying Texas tea from Iran.

Enter the arbitrage. While oil has been spiking, gas has been crashing. Gas is now selling at 15% of the cost of oil on an adjusted BTU basis. Another way of saying this is that you can buy oil for $16 a barrel instead of $110. It only takes a second with an abacus to understand the appeal of such a disparity.

Gas also has the additional benefits in that it is much cleaner burning than crude, lacks the sulfur and nitrogen dioxides, and produces half the carbon dioxide. That?s a big deal in Beijing where the air is so thick you can cut it with a knife on a bad day.

Enter the long term contracts. During the 1960?s and 1970?s Japan entered into huge long term contracts to buy LNG from Australia and Indonesia to feed their own economic miracle of the day. Because very expensive, hard to get or offshore supplies were tapped, the price was set at $16/MBTU. Those contacts are now expiring. Do you think they?ll renew at the old price, or go to Cheniere for the $2 stuff. Gee, let me think about that one for a bit.

Enter Fukushima. The nuclear meltdown last March prompted Japan to shut down 49 of 54 nuclear power plants that accounted for 25% of the country?s electric power generation. The brownouts that followed forced a sweltering summer on millions as the government urged consumers to shut off air conditioners to save juice. Power companies there have been scrambling to obtain conventional energy supplies, and have been a major factor in driving oil up from $75 to $100 since the fall. Cheap gas supplies from the US would meet this demand nicely.

The trigger. Last May, Cheniere got US government permission to export 2.2 billion cubic feet a day for 20 years. That would require it to convert the existing gasification plant to a liquifaction plant, something that can be done with some expensive re-engineering. It has already found several large international buyers to take delivery of the new end product. All that was missing was the money to finish the plant. My hedge fund buddies have been accumulating this stock since October, when it bottomed at $3, expecting an angel investor to appear. But it was one of those ?someday, it might happen? kind of stories better lead to long term players.

Then last week, Blackstone jumped in with a beefy $2 billion investment in Cheniere. That will enable them to obtain an additional $3 billion in debt financing needed to finish the first of two export facilities. They are now expected to come online in 2016.

How does Cheniere stack up as an investment? Frankly, it is kind of scary. The market cap is only $2 billion, and it pays no dividend. When the current spate of deals are done, it will have $5 billion in debt. The Stock has just run up from $3 to $17. And these facilities are dangerous to operate. One blew up in Texas in 1937 and killed 300 schoolchildren. As a result, local permits for these are very hard to come by.

But as you can see, a whole host of geopolitical, technology and economic strands tie together in this one company, all of which are positive for the share price. If the story comes true, as Blackstone hopes, then there could be a double or triple in the shares for the patient. To learn more about Cheniere Energy, please click here for their website at http://www.cheniere.com/default.shtml.

Did Somebody Light a Match?

This Week, It?s All About Jobs
Scroll to top