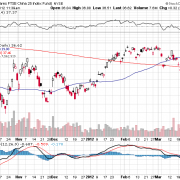 The handful of Chinese army officers I huddled with in the underground bunker all stared intently at their watches. Three, two, one, and then KABOOM! At exactly 12:00 noon, the blast of distant artillery sent a five inch shell screaming over our heads and exploded into the hill above us. The ground shook under our feet, causing dust to drift down from the concrete ceiling above us. It was 1976, and The People’s Republic of China just let lose its daily symbolic protest against its errant rebellious province, known locally as the Republic of China, and to you and me, as Taiwan.

Fast forward 36 years later and the Middle Kingdom is sending salvos of money raining down on that prosperous island. Two years ago, China Mobile (CHL), the world’s largest cell phone company, bought 12% of Far Eastone Telecommunications (4904.Taiwan). Although a small deal, it represented the first ever direct investment from China into Taiwan. The move triggered a takeover binge by big Chinese companies of their offshore cousins.

It was only a few years ago Taiwanese businessmen suffered long prison terms for just visiting, let alone investing in China, which they have done in a major, but surreptitious way, for 30 years. Readers of this letter are well aware of the long term attraction of both of these countries, which see GDP growth rates at a multiple of our own.

Closer ties between China and Taiwan auger well for the stock markets of the two high growth countries. The iShares MSCI Taiwan fund ETF (EWT) jumped by 17% in Q1, 2012. The iShares FTSE China 25 Index (FXI) has done less well, up 5%, as the country grapples with a temporarily slowing economy. At some stage, a country that is growing at four times our own rate, but at the same earnings multiple, will be a buy. But it appears not yet.

In the meantime, I guess that Beijing figured out that if you can’t beat them, buy them. The proxy takeover bid is mightier than the sword.

Where to Play From the Short Side
Scroll to top