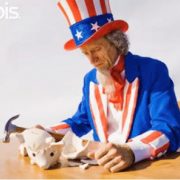 If you want to delve into the case against the long term future of US Treasury bonds in all their darkness, take a look at Foreign Affairs, the establishment bimonthly journal read by academics, intelligence agencies, and politicians alike, which I am sure you all have sitting on your nightstands. In a well-researched and thought out article penned by Roger C. Altman and Richard N. Haas, the road to ruin ahead of us is clearly laid out.

The US has no history of excessive debt, except during WWII, when it briefly exceeded 100% of GDP. That abruptly changed in 2001, when George W. Bush took office. In short order, the new president implemented massive tax cuts, provided expanded Medicare benefits for seniors, and launched two wars, causing budgets deficits to explode at the fastest rate in history. To accomplish this, strict 'pay as you go' rules enforced by the previous Clinton administration were scrapped. The net net was to double the national debt to $10.5 trillion in a mere eight years.

Another $4 trillion in Keynesian reflationary deficit spending by president Obama since then has taken matters from bad to worse. The Congressional Budget Office is now forecasting that, with the current spending trajectory and last year?s tax compromise, total debt will reach $23 trillion by 2020, or some 160% of today's GDP, 1.6 times the WWII peak.

By then, the Treasury will have to pay a staggering $5 trillion a year just to roll over maturing debt. What's more, these figures greatly understate the severity of the problem. They do not include another $9 trillion in debts guaranteed by the federal government, such as bonds issued by home mortgage providers, Fannie Mae and Freddie Mac. State and local governments owe another $3 trillion. Double interest rates, a certainty if commodity price inflation continues unabated, and our debt service burden doubles as well.

It is unlikely that the warring parties in Congress will kiss and make up anytime soon. It is therefore likely that the capital markets will emerge as the sole source of any fiscal discipline, with the return of the 'bond vigilantes.' They have already made their predatory presence known in the profligate nations of Europe, and they are expected to arrive here eventually. Such forces have not been at play in Washington since the early 1980's, when bond yields reached 13%, and homeowners paid 18% for mortgages. Since foreign investors hold 50% of our debt, policy responses will not be dictated by the US, but by the Mandarins in Beijing and Tokyo. They could enforce a cut back in defense spending from the current annual $700 billion. They might even demand a retreat from our $150 billion a year commitments in Iraq and Afghanistan.

Personally, I think the US will never recover from the debt explosions engineered by Bush and by 'deficits don't count' vice president Chaney. The outcome has permanently lowered standards of living for middle class Americans and reduced influence on the global stage. But I'm not going to get mad, I'm going to get even. I am going to make a killing profiting from the coming collapse of the US Treasury market through buying the leveraged short Treasury bond ETF, the (TBT). I am sticking to my short term forecast for this fund to rise from the current $19.16 to $26, then $32, then $40. And that is despite a hefty and rising cost of carry of nearly 0.5% a month.