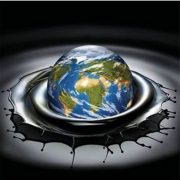 American oil imports from the Middle East are in free fall, down 35% in two years. They are quickly being replaced by tar sands imports from Canada, which are ballooning to 2 million barrels a day and at all time highs. American energy production is surging, thanks to new finds of natural gas showing up in everyone?s back yard, taking the country rapidly on its way to energy independence.

So why is the price of oil so damn high?

Everywhere you go to seek a shortage, you find a glut. Storage facilities at the Cushing, Oklahoma hub are practically overflowing. The Strategic Petroleum Reserve is close to its 727 million barrel maximum capacity, or 36 days of national consumption.

Traditionally, the beginning of the summer driving season heralded higher crude prices. But gasoline consumption has been sliding for five years, thanks to the widespread adoption of hybrids and electric cars, and the improved mileage of conventional automobiles.

Even the Iranian election results auger poorly for the price of oil. The win by moderate Hassan Rohani, who boasts a doctorate from a Scottish university, promises to ease tensions with the United States over the nuclear issue.

More mysterious is the fact that the price of oil has been levitating in the face of the utter collapse of virtually every other commodity. Dr. Copper is handing out ?F?s? these days, the red metal down 30% this year. Iron ore is close to 50% down from its peak, to the deep distress of many Australians and their beleaguered dollar. Even the barbarous relic is off, gold falling 31% from its high. How come the Chinese economic slowdown is dragging down the price of everything except the one it needs the most?

The US decision to send weapons to Syria is, no doubt, positive for oil prices, but it is only worth a bump for a day. America has also announced joint military maneuvers with Jordan. How much do you want to bet that they accidentally leave their weapons behind?

Iran responded by sending 4,000 troops into the battered country to join Hezbollah from Lebanon, who are already there. Syria is turning into the Spanish Civil War of our age. But as it produces no oil, it shouldn?t materially impact prices.

Looking at speculative long positions held by hedge funds, I find them at multiyear highs. My guess is that investment demand, not consumption, accounts for up to $30 of the current $98 price of black gold.

Maybe we should just write all this off to another instance of prices moving the opposite direction of fundamentals, which has become so common this year. Or perhaps President Obama is right? Is it the work of evil speculators?

How To Get a Price Rise From a Global Glut?

Decoding What?s in Your Pocket