I managed to catch a few comments in the distinct northern accent of Jim O’Neil, the fabled analyst who invented the ‘BRIC’ term, and who has been kicked upstairs to the chairman’s seat at Goldman Sachs International (GS) in London.

Jim thinks that it is still the early days for the space, and that these countries have another ten years of high growth ahead of them. As I have been pushing emerging markets since the inception of this letter in 2008, this is music to my ears. By 2018 the combined GDP of the BRIC’s; Brazil (EWZ), Russia (RSX), India (PIN), and China (FXI), will match that of the US. China alone will reach two thirds of the American figure for gross domestic product. All that requires is for China to maintain a virile 8% annual growth rate for eight more years, while the US plods along at an arthritic 2% rate. China’s most recent quarterly growth rate came in at a blistering 8%.

?BRIC? almost became the ‘RIC’ when O’Neil was formulating his strategy a decade ago. Conservative Brazilian businessmen were convinced that the new elected Luiz Ignacio Lula da Silva would wreck the country with his socialist ways. He ignored them and Brazil became the top performing market of the G-20 since 2000. An independent central bank that adopted a strategy of inflation targeting was transformative.

This is not to say that you should rush out and load up on emerging markets tomorrow. The entire asset class is still digesting its grim performance in 2011, which saw the average BRIC stock market fall 20%, and there may be some work to do here. American big cap stocks are the flavor of the day, and as long as this is the case, emerging markets will continue to blend in with the wall paper. Still, with growth rates triple or quadruple our own, they will not stay ?resting? for long. 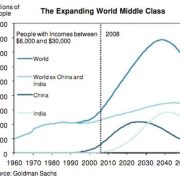 The Future of Consumer Spending?

Murray Sayle: The Passing of a Giant in Journalism