I am going to use the gap move overnight in the Japanese yen to take profits in the Currency Shares Japanese Yen Trust (FXY) July, 17, 2015 $81-$83 in-the-money vertical bear put spread.

At the current market, we have captured 85% in the potential profit in a mere four days. This givers you a profit over four trading days of 9.4%.

Not only that, we get to take this profit a 45 months ahead of the major risk event of the month, the Federal Reserve?s announcement of its decision in interest rates for the coming quarter.

If the market has taught you anything this year, it is to take the quick profits, and dodge the big risk events when you can.

Weaving and dodging, that?s what it?s all about.

You can execute this spread anywhere in the $1.95 range and get most of the gain.

Don?t get me wrong here. I still thing the yen will continue to fall, possibly taking the (FXY) below $75 by year end.

However, with a large number of contracts, commissions will be an issue for some of you. So you might want to run this one into expiration. Time to call your broker and get a cheaper commission rate.

The best execution for the options can be had by placing your bid for the entire spread in the middle market and waiting for the market to come to you. The difference between the bid and the offer on these deep in-the-money spread trades can be enormous.

Don?t execute the legs individually or you will end up losing much of your profit.
Keep in mind that these are ballpark prices only. Spread pricing can be very volatile, and the liquidity in the options market isn?t that great these days. 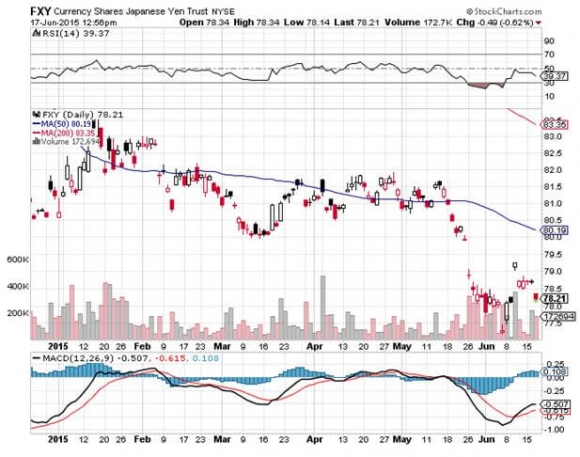