Forget about Ebola and focus on the economy. There is no way that today?s shellacking in the stock market is justified by the healthy state of the US economy.

The $27 dollar drop in the price of oil is leading to a 50-cent plunge in the price of gasoline. That gives consumers and extra $50 billion in their pockets to spend. Merry Christmas retailers (M)!

Who are the biggest single beneficiaries of cheap fuel? The airlines, which have been shot down in flames because an Ebola carrying passenger who recently flew on Frontier Airlines. United Airlines (UA) has suffered an 18% decline since the first week of September, while American Airlines suffered an impressive 20% hit.

This is a roll down to make back the money we just lost on the October $180-$184 vertical bull call spread. At $30, volatility is so sky-high that the (SPY) has to drop another $11 for us to break even on this trade.

That is a staggering 15% down from the September $202 high. I have to remember back to the 2008-2009 crash to find trading conditions this extreme.

The way to make back your money is to go far, far out of the money, and remain short dated in the front month. Fortunately, we have plenty of dry powder to do this.

The S&P 500 (SPY) November, 2014 $168-$173 in-the-money vertical bull call spread accomplishes this. You could handle an entire bear market in a month and still come out ahead.

You can buy this spread anywhere in a $4.10-$4.30 range and have a reasonable expectation of making good money on this trade.

For those who can?t do option spreads stand aside until the market calms down. 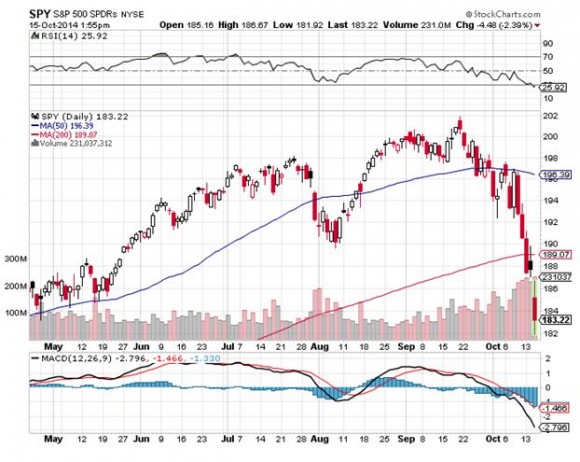 You Never Know When They Are Going to Show Up