END_OF_DOCUMENT_TOKEN_TO_BE_REPLACED

The great thing about the sudden $5 pop is the price of oil since Monday is that it battle tests your portfolio. You really don’t know what you own and the risks it entails until something like this comes along. I’ll explain why.

For a start, you get a very clear idea of which of your assets are of the “RISK ON” variety, and which are of the “RISK OFF” persuasion. This is easier said than done because asset classes often change gender, flipping from “RISK ON” to “RISK OFF” without warning. Knowing which is which is crucial in hedging portfolios and measuring your risk. It is not unusual for a trader to believe he has a safe bet on, only to watch his portfolio completely blow up because the cross asset relationships have changed.

Look at Tuesday’s market action. Traditional “RISK ON” assets, like stocks (SPY), got pounded. The traditional flight to safety assets, such as bonds (TLT) and gold, did well. This is where a typical balanced portfolio does well. Oil (USO) is usually a “RISK ON” asset, but not this time. Fears of a supply interruption, no matter how unfounded they may be, sent prices for Texas tea through the roof. On this round, oil clearly fell out of the “RISK ON”/”RISK OFF” model.

Not only do assets show their true colors in conditions like this. They also demonstrate their character. Look at the gold/silver ratio. Historically, silver (SLV) moves twice as fast has gold (GLD), with double the beta. Since the last low, it has doubled gold’s move. When the barbarous relic gained 17% from the recent $1,175 low, silver roared some 36%. Thus the relationships have been maintained.

How did my own model trading portfolio do? I took it on the nose with my oil short, moving from a profit to a loss. But my short positions in the yen and the euro did well, nearly offsetting those losses. So overall, my 35% year to date performance has been protected, and the volatility kept down. This is whyy I always try to run a book of counterbalancing “RISK ON” and “RISK OFF” positions, or stay very small. You should do the same.

I wanted to get the low down on clean coal (KOL) to see how clean it really is, so I visited some friends at Lawrence Livermore National Laboratory. The modern day descendent of the Atomic Energy Commission, where I had a student job in the seventies, the leading researcher on laser induced nuclear fission, and the administrator of our atomic weapons stockpile, I figured they?d know.

Dirty coal currently supplies us with 35% of our electricity, and total electricity demand is expected to go up 30% by 2030. The industry is spewing out 32 billion tons of carbon dioxide (CO2) a year and the great majority of independent scientists out there believe that the global warming it is causing will lead us to an environmental disaster within decades.

Carbon Capture and Storage technology (CCS) locks up these emissions deep underground forever. The problem is that there is only one of these plants in operation in North Dakota, a legacy of the Carter administration, and new ones would cost $4 billion each. The low estimate to replace the 250 existing coal plants in the US is $1 trillion, and this will produce electricity that costs 50% more than we now pay. In a gridlocked constrained congress, this is a big ticket that is highly unlikely to get picked up.

While we can build a wall to keep out illegal immigrants from Latin America, it won?t keep out CO2. This is a big problem as China is currently completing one new coal fired plant a week. In fact, the Middle Kingdom is rushing to perfect cheaper CCS technologies, not only for their own use, but also to sell to us. The bottom line is coal can be cleaned, but at a frightful price. 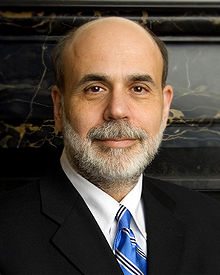 Since nothing less than the fate of the free world depends on the judgment of Ben Bernanke these days, I thought I?d touch base with David Wessel, the Wall Street Journal economics editor, who has just published In Fed We Trust: Ben Bernanke?s War on the Great Panic.

Bernanke was the smartest kid in rural Dillon, South Carolina, who, through a series of improbable accidents, and intervention by a local black civil rights leader, ended up at Harvard. He built his career on studying the Great Depression, then the closest thing to paleontology economics had to offer, a field focused so distantly on the past that it was irrelevant. Bernanke took over the Fed when Greenspan was considered a rock star, inhaling his libertarian, free-market, Ayn Rand inspired philosophy in great giant gulps.

Within a year, the economy suddenly transported itself back to the Jurassic Age, and the landscape was overrun with T-Rex?s and Brontosaurs. He tried to stop the panic 150 different ways, 125 of which were terrible ideas, the remaining 25 saving us from the Great Depression II. This is why unemployment is now only 9.1%, instead of 25%.

The Fed governor is naturally a very shy and withdrawn person, and would have been quite happy limiting his political career to the Princeton, NJ school board. To rebuild confidence, he took his campaign to the masses, attending town hall meetings and pressing the flesh like a campaigning first term congressman.

The price tag for Ben?s success has been large, with the Fed balance sheet exploding from $800 million to $2.7 trillion, solely on his signature. The true cost of the financial crisis won?t be known for a decade or more. The biggest risk is that we grow complacent, having pulled back from the brink, and let desperately needed reforms of the financial system and the rebuilding of Fannie Mae and Freddie Mac slide. This is already starting to happen.

How Bernanke unwinds this bubble will define his legacy. Too soon, and we go back into a real depression. Too late, and hyperinflation hits. That?s when we find out who Ben Bernanke really is.

?Anyone who has a yearend price target is a fool,? said Jack Bogle, founder of the Vanguard index funds.