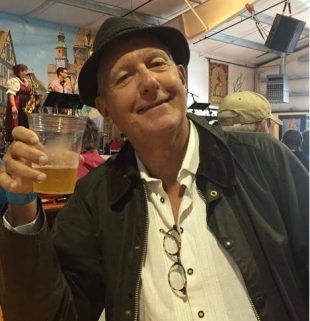 It?s a good thing I went to an Oktoberfest last week.

That gave me a chance to get my German up to snuff just in time for Deutsche Bank to run into financial troubles.

Since 2008, the knee jerk reaction to bad news about any major bank is that the Lehman Brothers nightmare is about to repeat itself.

It only took a few calls to Frankfurt and some reminiscing about the good old days in West Berlin for me to figure out that Deutsche Bank is no Lehman. They have tons of liquid cash and a rock solid balance sheet.

A systemic threat it is not.

Do you really think the Germans are going to bail out Greece, but let its largest bank go? I don?t think so.

It is only fear of a 50% dilution from a new capital raise that is driving investors out of the stock.

Not helping is the $14 billion in fines the mega bank still owes the US Justice Department related to abuses committed in the run up to the 2008 crash.

Does that sound remarkably similar to the $14 billion Apple (AAPL) owes the Irish government? I?m sure it?s just a coincidence. And I am equally shocked they allow gambling in the casino.

However, automatic fears like this will probably continue for another generation, much like they did after the great 1929 crash, leaving investors on the sidelines.

That all adds up to a giant SELL for all asset classes. There really is no place to hide.

So far, every puke-out has been met by a wall of buying from underweight, underperforming, performance-chasing investors targeting 2,013 in the S&P 500 (SPX).

If this behavior continues, we could be in for what I call ?The dreaded flat line of death?.

This occurs when markets trade in incredibly tight ranges creating opportunities for virtually no one. That is exactly what we saw during the five-month period during the spring and summer of this year.

This could last all the way until the presidential election on November 8th.

So I have been hiding out with a nice little short position in the bond market (TLT), which delivered a convenient two point dump on the last trading day of the month, just pushing my performance mercifully into the green.

Hey, in these miserable trading conditions, I?ll take a push any time.

Isn?t that what?s supposed to happen when the Fed promises to raise interest rates in December?

You could have made a lot of money last week trading the Volatility Index (VIX) which made two round trips between $12-$15, a 25% range.

When will the next market panic ensue?

CNN?s Anderson Cooper will be the moderator, and the questions will be randomly posed by individual citizens in a town hall format and via social media.

It will be a real ?think on your feet? challenge for both candidates.

Finally, since I am basically a positive person, I like to end on a high note.

San Jose, CA based Nutanix (NTNX) launched the best performing IPO of the year on Friday, up 131% on the first day.

The performance had the airwaves in Silicon Valley burning up.

Yes, I know these deals are engineered to create a structural short squeeze at the beginning.

But is this the deal that gets unicorn giants like Uber and Airbnb off the bench? Are another 100 unicorns behind them ready to go public? Are extravagant IPO parties making a return after a 16-year hiatus?

Most importantly, IS THE DOTCOM BUBBLE BACK?

The possibilities boggle the mind.

On Monday, October 3 at 8:30 AM, we get August Gallup Consumer Spending which should show that Americans are using their credit cards as much as ever.

On Tuesday, October 4 at 8:55 AM EST, we learn the Redbook for the week, tracking the behavior of consumers at chain stores, discounters, and department stores.

On Wednesday, October 5 at 10:00 AM EST, we get September Factory Orders and the ISM non-Manufacturing Index.

On Thursday, October 6 at 8:30 AM EST, we get the Weekly Jobless Claims which should confirm that employment remains at four decade highs.

Friday, October 7 delivers us the September Nonfarm Payroll report at 8:30 AM EST, the big release of the week. Expect a big bounce back from the disappointing 151,000 print last month, as well as substantial upside revisions.

We wind up with the Baker Hughes Rig Count on Friday at 1:00 PM EST. Worryingly, the trend has been up for the past 13 out of the past 14 weeks. Given OPEC?s surprise, and not believed, production cap last week, this report should garner more interest than usual.

All in all, I expect us to continue trading in narrow ranges, with profits accruing only to the quick and the nimble.

?If my analysis about Deutsche Bank proves correct,? all of the volatility could be confined to Friday morning.

Good luck and good trading. Keep your hard hat on. 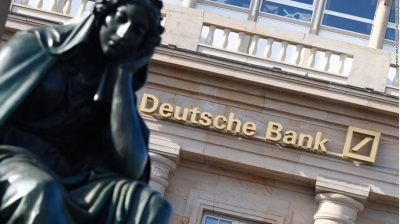 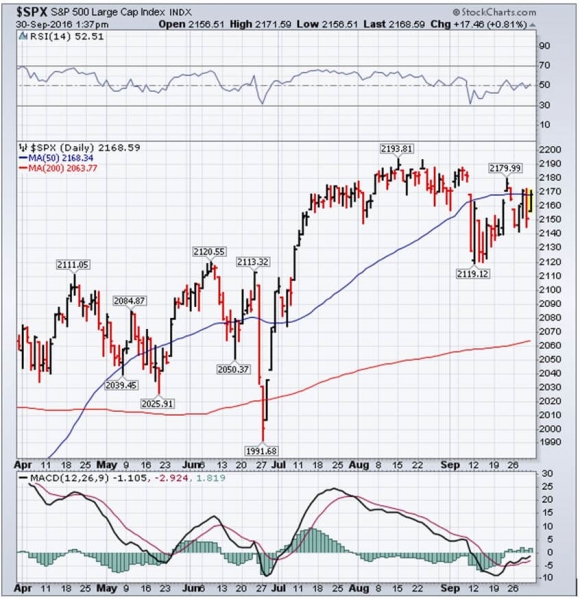 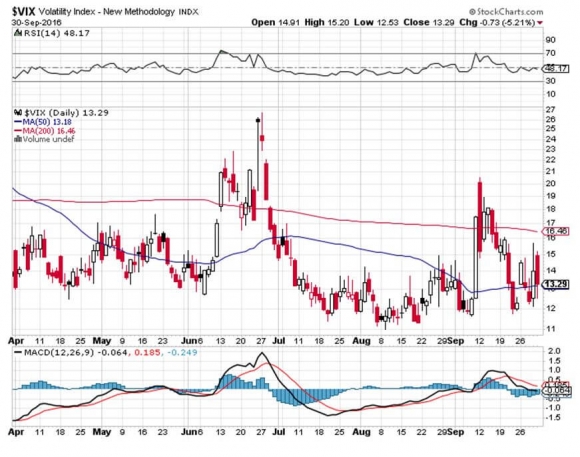 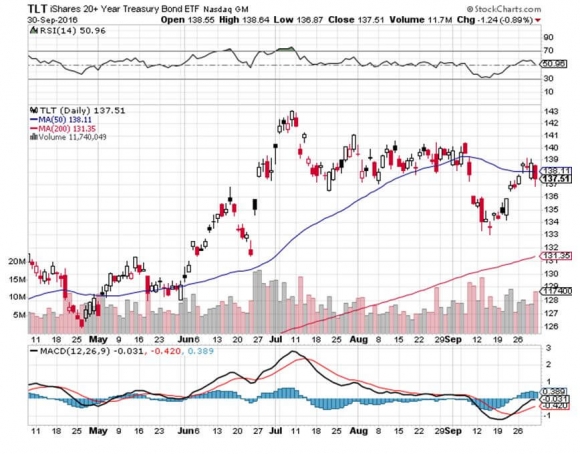 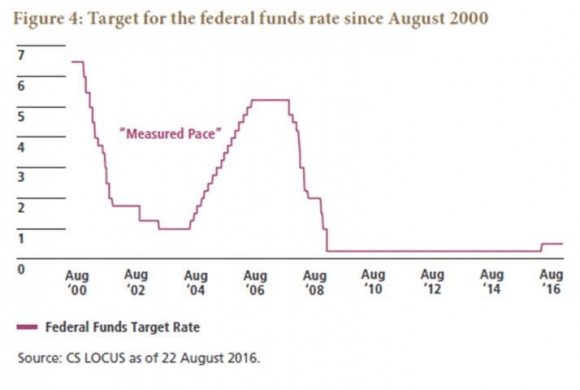 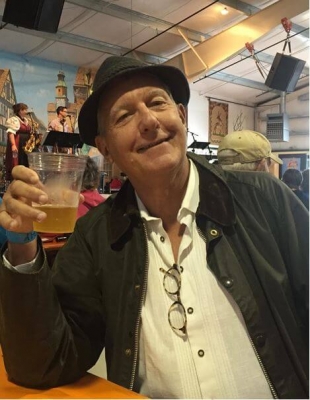 All is Good With Deutsche Bank

The S&P 500 has just bounced off the 214 level for the second time this month.

Is it safe to come out of your cave? Is to time to take the hard hat back to the basement?

If you had taken Cunard?s round-the-world cruise three months ago, as I recommended, you would be landing in New York about now, wondering what the big deal was. Indexes are unchanged since you departed.

This truly has been the Teflon market. Nothing will stick to it. In June when Brexit hit, many predicted the end of the world. The market crashed. Then within days, it recovered the loss and moved on to new all time highs..

It makes you want to throw up your hands in despair and throw your empty beer can at the TV. All this work, and I?ve delivered the perfectly wrong conclusions?

Let me point out a few harsh lessons learned from this most recent melt down, and the rip your face off rally that followed.

Remember all those market gurus poo pooing the effectiveness of the ?Sell in May and go away? strategy? This year it worked better than ever.

This is why almost every Trade Alert I shot out for the past five months has been from the short side. It is also why I was so quick to cover my most recent shorts for a loss.

We are about to move from a ?Sell in May? to a ?Buy in November? posture.

The next six months are ones of historical seasonal market strength (click here for the misty origins of this trend at ?If You Sell in May, What To Do in April??).? You must be logged into your account to read this article.

The other lesson learned this summer was the utter uselessness of technical analysis. Usually these guys are right only 50% of the time. This year, they missed the boat entirely.

When the S&P 500 (SPY) was meandering in a narrow nine point range, and the Volatility Index ($VIX) hugged the 12-15 neighborhood, they said this would continue for the rest of the year.

When the market finally broke down in June, cutting through imaginary support levels like a hot knife through butter, they said the market would plunge to 175, and possibly as low as 158.

It didn?t do that either.

When the July rally started, pitiful technical analysts told you to sell into it.

This is why technical analysis is utterly useless as an investment strategy. How many hedge funds use a pure technical strategy?

Absolutely none, as it doesn?t make any money.

At best, it is just one of 100 tools you need to trade the market effectively. The shorter the time frame, the more accurate it becomes.

On an intraday basis, technical analysis is actually quite useful. But I doubt few of you engage in this hopeless pursuit.

This is why I advise portfolio managers and financial advisors to use technical analysis as a means of timing order executions and nothing more.

Most professionals agree with me.

Technical analysis derives from humans? preference for looking at pictures instead of engaging in abstract mental processes. A picture is worth 1,000 words and probably a lot more.

This is why technical analysis appeals to so many young people entering the market for the first time. Buy a book for $5 on Amazon, and you too can become a Master of the Universe.

Who can resist that?

The problem is that high frequency traders also bought that same book from Amazon a long time ago and have designed algorithms to frustrate every move the technical analyst makes.

Sorry to be a buzz kill, but that is my take on technical analysis.

Hope you enjoyed your cruise. 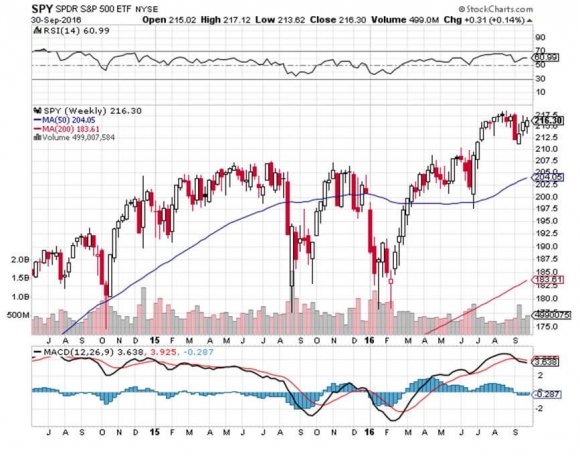 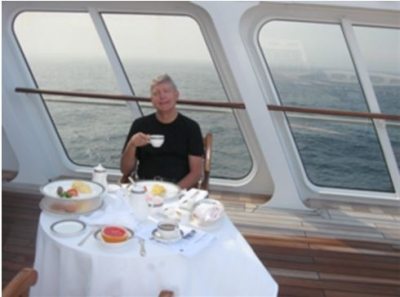