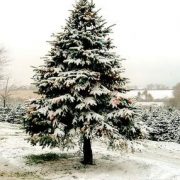 When I was growing up in Los Angles during the fifties, the most exciting day of the year was when my dad took me to buy a Christmas tree. With its semi desert climate, Southern California offered pine trees that were scraggly at best. So the Southern Pacific Railroad made a big deal out of bringing trees down from much better endowed Oregon to supply holiday revelers.

You had to go down to the freight yard at Union Station on Alameda Street to pick them up. I remember a jolly Santa standing in a box car with trees piled high to the ceiling, pungent with seasonal evergreen smells, handing them out to crowds of eager, smiling buyers for a buck apiece. Watching great lumbering steam engines as big as houses whistling and belching smoke was enthralling.

We took our prize home to be decorated by seven kids hyped on adrenalin, chugging eggnog. A half century later, the Southern Pacific is gone, the steam engines are in museums, anyone going near a rail yard would be mugged or arrested for vagrancy, and Dad long ago passed away. Dried out trees at Target for $30 didn?t strike the right chord.

So I bundled the kids into the SUV and drove to the primeval, foggy coastal redwood forests of Northern California. Five miles down a muddy logging road, it was just us and a million trees. The kids, hyped on adrenalin, made the decision about which perfect eight footer to take home. I personally chopped it down, tied it to the roof, and drove us the three hours home. With any luck, these memories will last until the next century, long outlast me.