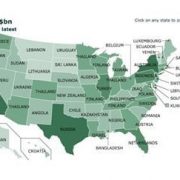 My mother lives in Pakistan, my daughter in Greece, and I have a ski chalet in Peru. What's more, I have strategy luncheons planned for Australia, Thailand, and Turkey.

At least these would be my conclusions after looking at a map of the United States prepared by my esteemed former employer, The Economist magazine, renaming each state with its international equivalent in GDP.

There are other tongue-in-cheek comparisons to be made. Texas is portrayed by Russia, which makes sense, as both are oil exporters. Ditto for Alaska, which is represented by Oman. As for Hawaii? It is renamed Croatia. Now that would really give president Obama birth certificate problems!

I worked for this august publication for a decade during the seventies, and have been reading the best business magazine in the world for nearly over four decades. They never cease to inform, entertain, and titillate.

An April 1 issue once did a full page survey on a fictitious country off the coast on India called San Serif. It noted that if the West coast kept eroding, and the East coast continued silting up, the country would eventually run into the subcontinent, creating serious geopolitical problems.

It wasn't until someone figured out that the country, the prime minister, and every town on the map was named after a type font that the hoax was uncovered. This was way back, in the pre-Microsoft Word era, when no one outside the typesetters union knew what 'Times Roman' meant.