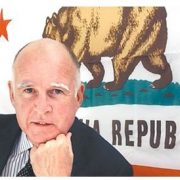 On my last trip to my lakefront estate at Lake Tahoe, I stopped off at the state capital, Sacramento, to look in on my old friend, Governor Jerry Brown. It is crucial that readers across the country, and indeed, around the world, know what Jerry is thinking. California has always been a ?pathfinder? state, and what starts here is often adopted across the country. This little chat could be a hint of what?s headed your way.

As I bounded up the steps of the marble capitol building, the first thing I noticed was the absence of the previous governor, Arnold Schwarzenegger?s, smoking tent. The governator had it erected on the lawn so he could enjoy long puffs on his stogies and not be in violation of the state ban on indoor smoking. This was in the state that invented the anti-smoking movement.

I have trod a very long path with Jerry Brown. His dad, then Governor Pat Brown, ordered teargas dropped on me from a helicopter while I was at a Berkeley anti-war march nearly half a century ago. He was Secretary of State while I attended the University of California, often going head to head against then governor Ronald Reagan.

I was in Asia during his first two terms as governor from 1975-83, when his girlfriend, Linda Ronstadt, called him the ?moonbeam governor?, a nickname he has yet to live down. Warning: don?t call him that to his face.

I ran into him at the Democratic convention in New York in 1980 when he mounted his second run for the presidency. After he retired and was considered a political has-been, I bumped into Jerry once again when he studied Zen Buddhism in Japan.

In 1999, he was elected mayor of Oakland, a mostly black Bay Area slum near bankruptcy, which many considered ungovernable. He did a spectacular job, fighting corruption, rebuilding the school system, and sparking an economic renaissance. It was like he had nothing left to lose.

To the amazement of many, Jerry ran and won a third term as governor in 2011, taking over the wreckage left by the disastrous reign of Arnold Schwarzenegger. He has been raising eyebrows nationally ever since.

He immediately launched a crash campaign to raise taxes and cut spending. His Proposition 30 succeeded at the polls, raising sales taxes for everyone and boosting income taxes on those earning more than $500,000. The Golden State now has the highest combined federal and state taxes in the country, at 51.5%. The proceeds of the tax hike are solely dedicated to increasing $6 billion in spending on education.

State leaders learned a long time ago that people will pay a premium to live here. They pay double for housing, so why not double taxes? The sunshine has value. As I explain to guests at my strategy luncheons, high earners don?t mind paying an extra dollar in tax when it means they can make and extra $10, or $100, in profits. That has been the case with a technology industry here that has been booming almost non-stop since WWII.

Brown originally studied at a seminary school to become a catholic priest. To this day, he frequently quotes from the Bible, and he gave my Latin a real workout. Citing Luke, Chapter 12, verse 48 with regards to the sharing of the tax burden, ?to those who are given much, much is required.? The seven-year sunset provision for the new income tax also comes from the ?seven years of plenty?, found in the Old Testament.

To say Jerry is iconoclastic is a disservice to the word. He is a combative 75 year old who says what he thinks at the drop of a hat, no matter whom it offends, be they friend or foe. He is a mix that is all too rare in this country, a flaming liberal on social issues, while an ironclad conservative on fiscal matters.

He is a staunch advocate for the environment. He appointed the first gay judge in the US. He is about to deliver the toughest anti-gun legislation in the country. He has been a lifelong cheerleader for the alternative energy industry.

Brown has also completed the most ambitious cuts in social spending in the state?s history, including grants for the disabled, child welfare, and Medical. Some 40,000 non-violent inmates were released from prisons into probation to save money. The University of California saw its budget cut by a massive 25%. State employment was chopped by 50,000, and some 50 redundant state boards were eliminated.

Jerry told me that the state?s problems were caused by two bubbles; the Internet one in 2000, and the indiscriminate mortgage lending that followed. That created a budget deficit that ballooned to $27 billion by the time he returned to office, which cut the California?s credit rating to the lowest of the 50 states. In a short 18 months, Brown balanced the budget, and state debt is now rapidly seeing upgrades, reducing borrowing costs.

The governor says that the spending cuts have been very tough to swallow. Even the carpet in his office is falling apart, and he confesses to eating day old tuna sandwiches. On the tax front, he says that ?when you have more in the cookie jar, you have more cookies to give.?

Jerry says his goals as governor were threefold. He eliminated false accounting gimmicks, which shuffled the state?s financial problems under the carpet, where they festered. He only implemented new taxes if people voted for them. And he returned decision making to cities and counties on schools, because the entities closest to problems have best ability to solve them, a policy he calls ?realignment?. Decentralization and devolution of power to local authorities isn?t something you hear about from liberals very often.

He points out that the big growth in state spending didn?t arise from some idealistic social agenda. Three strikes law mandating extremely long sentences caused an explosive growth of the prison system, which expanded from 3% to 11.5% of the state budget since the seventies. ?An aging population is also prompting a substantial increase in medical spending. These two items alone account for the entire increase in state spending for the past 40 years on a GDP adjusted basis.

I asked Jerry what he thought about the efforts by other tax-free states, particularly Texas, to lure business away. He erupted into a tirade. He argued passionately there was absolutely no evidence that people moved to avoid taxes, which amount to only a few thousand dollars a year for millionaires.

The economy here is booming. The best and the brightest minds in the world are pouring into the most creative and innovative place on the planet. There have been 300,000 private sector jobs created during his current tenure. Exports are up 17%. The state draws 50% of global venture capital investment, and files for four times more patents than runner up New York. The one-ton truck now driving around Mars was built in Pasadena.

My obvious last question had to be ?what?s next? for the energetic governor. Might his tax raising, spending cutting habits have a national audience? ?Do I have more offices in mind? I?m not telling,? he answered, with a twinkle in his eye. That is a lot to say for someone who has already held every high office in his home state.

I got a call from my car telling me it was time to get moving if we were going to make it over Donner Pass before it iced up. I said, ?see you next time? to Jerry. There always seems to be a next time with Jerry.

?What a Long, Strange Trip It?s Been.?

Is It Time to Buy Technology Stocks?
Scroll to top