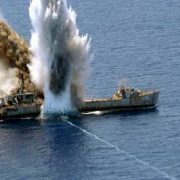 The Euro hit my yearend target today after a two cent plunge sent it down to the $1.29 handle. You can thank German Chancellor, Angela Merkel, who in the strongest possible terms, said there was no way she would consent to an increase in the size of the European bailout package.

It didn?t help that in the Federal Reserve comments today they basically ran up the white flag and admitted that there is nothing left for them to do but keep interest rates at ?exceptionally low levels? for the foreseeable future. They see moderate growth last pegged at 3%, which means they are about 1% higher than reality.? We are left to wait until January 25 for the all-powerful government agency to take longer term measures to help the economy, such are targeting unemployment rates.

I have been happily trading in an out of the Euro from the short side since April, catching almost all of the move down from $1.50, except for the last three cents. There was clearly a lot of new shorts initiated today as the euro broke multi month support levels. To say this is a crowded trade would be a vast understatement, as these new positions are being added to existing ones that are at all-time highs. A recent survey revealed that 67% of all hedge funds are currently running short positions in the Euro.

This is a crummy place to get involved, as the beleaguered European currency is now severely oversold on a short term basis. I want to wait for a four cent rally against Uncle Buck to jump back in the game again. I would be surprised if we plumbed new lows from here, but then this has been a surprising year. Wait until Q1, 2012 before we see a $1.25 print.

It would be easy to sit back and be complacent, believing that this is not our problem. But it is. A recession that Europe?s new austerity is certain to bring, will likely chip 0.5% to 1.0% off of US GDP growth in 2012. Since we are likely growing at a modest 2% rate now, we don?t have a lot to give away. Looking at an American economy that is facing death by a thousand cuts, this is one giant slash.