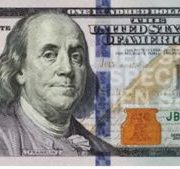 All of the high-grade paper used by the US Treasury to print money is bought from a single firm, Crane & Co., which has been in the same family for seven generations.

Last year, the Feds printed 38 million banknotes worth $639 million. Although they have seen the recession cause the velocity of money to decline, recent reflationary efforts have spurred a big increase in demand for paper for $100 dollar bills.

The US Treasury first issued paper money in 1861 to help finance the Civil War, and Crane has been supplying them since 1879.

The average life of a dollar bill is 21 months. Who said no one was doing well in this economic slowdown? M1, or notes and coins in circulation, is already exploding. Is this a warning of an imminent jump in inflation? I doubt it, not until everyone I know starts getting pay raises out of the blue.

In the meantime, check out the new 3D $100 bill. It includes the latest anti-counterfeiting techniques, like a new blue security strip, tiny liberty bells that morph into the number 100, and “United States of America” micro printed on Franklin’s jacket collar.

It’s ironic that the balanced scales, a symbolic reference to the founding fathers’ commitment to maintaining a balanced budget, are still on the new Benjamin.

Old Ben must be turning over in his grave.

Out With the Old

In With the New

Market Outlook for the Week Ahead, or Closed for Business
Scroll to top