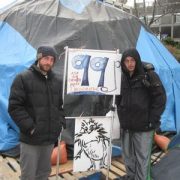 I arrived early for a meeting in Salt Lake City the other day. I noticed a cluster of tents near the ice skating rink and thought I would catch an update on the Occupy Wall Street movement.

Two guys emerged from a jerry built, homemade structure and braved the frigid 20 degree temperatures to find out what I was all about. I said I was a card carrying member of the 1% and wanted hear their side of the story. They replied that the local movement had dwindled from 100?s to a couple of dozen hard cores, due to the inclement weather. Indeed, there were mounds of fresh snow piled around the edges of the square. But they fully expected their numbers to rebuild after the spring though. The police were being cool and leaving them alone. As we spoke, I noticed an occupier head off to work.

I am following this movement closely because it has the potential to turn the election upside down this year. This could be the Tea Party of 2012, with a similarly large impact on the election results. President Obama has recently expressed sympathies with Occupy aims, while safely keeping his distance from the actual movement. If he can frame this election in terms of the 99% versus the 1%, and paint Romney in a corner as representing the 1%, then he has a winner. He poll numbers have recently been rising sharply, and have been tracking nearly 1:1 with the S&P 500 Index.

I asked them what they wanted and what I got was a minestrone soup of accurate facts, urban legends, and folk tales. I corrected them at every turn. Yes, their interpretation of the repeal of Glass Steagle was correct, but the imposition of the Volker Rule will effectively bring its return. That?s what Bank of America (BAC) shares at $5 was telling us. No, there is no law barring ownership of more than 5 pounds of gold. In fact, you can purchase 100 ounce bars on the Internet. I have several friends who have done so. And the bars in Fort Knox in Kentucky aren?t really lead ones painted gold. I had someone check.

The Chinese don?t shoot its citizens for gold ownership. They stopped that a few years ago. Now they are trying to encourage individual gold ownership, and coin dealers selling once ounce gold and silver pandas are popping up everywhere. No, the Chinese economy is not going to crash, forcing them to sell all their Treasury bonds and crash our economy too.? Yes, the US dollar will remain the reserve currency for the rest of my life, but maybe not the rest of theirs. There just is no other alternative currency with the breadth and depth of the greenback. Alternatives proposed in the past, like the yen and the Euro, have proven to have far more problems than Uncle Buck.

I asked how they were fixed for food. They said that local bakeries were given them their old bread and pastries, and other supporters regularly dropped off dented canned food. I pulled a $100 out of my wallet and suggested they order in pizzas for lunch for everyone. They said that was really cool, but would I mind if it was vegetarian?

?Your Future May Be In Their Hands