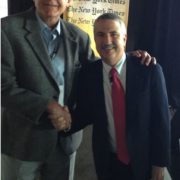 Whenever the world undergoes an unusual amount of turmoil, as has taken place in recent months, I know there is one source that I can go to to make sense of it all.

That would be New York Times columnist Tom Friedman.

The peripatetic writer is completing the final touches on his latest book due out in November, ?Thank You for Being Late: An Optimist’s Guide to Thriving in the Age of Accelerations?.

Described as a field guide to the 21st century, the book will seek to get a handle on the implications of simultaneous hyper accelerating technologies, and what they mean for us.

Tom chose this title because he dreamed it up while awaiting ever late meetings with Washington DC politicians.

Tom says we live in a hockey stick world. Technology, climate change, and Moore?s Law are all wreaking havoc on our understanding of everything. As a result, the world is changing beyond all recognition faster than we can comprehend.

During the Cold War, cash flows from the US and the old Soviet Union artificially propped up weak states.

Now that we are in a new unipolar world, that money is gone. The outcome is the failed state, Al Qaida, and ISIS, and the transition of the international scene from order to disorder.

Domestically, our politics were driven for nearly a century by Roosevelt?s New Deal and the Cold War. Today, the three hockey sticks are the main factors.

Political parties that fail to recognize this will blow up. Only resilient parties will adapt and survive.

The ?cloud? is misnamed. What is happening is an immense release of energy that is instantly turning over beliefs that stood fast for eons.

Look at how fast gay rights in Ireland went national, and the speed with which the confederate flag was removed from Southern US statehouses.

Conflicts that simmered for centuries are rapidly turning violent. In the Middle East a battle over a shrinking pie in the form of falling oil revenues has heightened the Iran-Saudi, Shiite-Sunni conflict.

A world moving from order to disorder is spawning mass migration. Kids in Syria have not been to school for five years, due to a never ending Civil War.

The US economy is spinning off new jobs at an incredible pace, but they all require constant learning and relearning.

If you can?t do this, they are the wrong jobs, and you don?t fit into the new economy. Being average no longer cuts it anymore. Enter the angry white men and polarization.

A parallel explosion of economic interdependency is creating vast new riches, but back breaking debts as well.

The biggest threat to humanity is the growing power of one.

Tom and I date back to the old days in Beirut during their vicious civil war in the early eighties, when working as a journalist meant not knowing if you would wake up the next morning.

He worked for the old United Press International, and I for the still prospering Economist.

Our mutual friend, the Associated Press?s Terry Anderson, the best man at my wedding, was kidnapped out of his apartment and held hostage by Shiite Hezbollah militants for five years, an ordeal he described in chilling detail in his book, Den of Lions.

Tom popularized the concepts of globalization and a flat world in a series of groundbreaking, best selling books, including The Lexus and the Olive Tree, Hot, Flat, and Crowded, and That Used To Be Us. 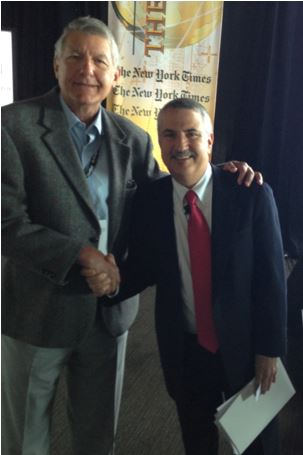