We received a convincing data point as to why we trade cloud companies and not the semiconductor chips.

The rift between blacklisted telecom equipment giant Huawei Technologies and the U.S. administration has had a dramatic side-effect on the business models of U.S. chip companies.

The U.S. commerce department now will require licenses for sales to Huawei of semiconductors made abroad with U.S. technology signaling more turbulent times ahead.

Huawei is the Chinese smartphone maker and telecom provider who has stolen intellectual property from the West and used mammoth subsidies funded by the Chinese communist party to build itself into one of the premier telecom equipment sellers and number two maker of smartphones in the world.

I seldom issue trade alerts on semiconductor chip companies because I’d rather not compete with the Chinese communist party and their capital funding capacity.

China is hellbent on subsidizing its own chip capacity as many Western chip companies are blocked from doing deals with them.

A recent example is the Chinese communist party injecting $2.25 billion into a Semiconductor Manufacturing International Corp. wafer plant to ramp up development in the sector.

Exploiting the economic freedom and laws of the West has worked out perfectly for Chinese tech enabling them to develop juggernauts like Tencent and Baidu.

In fact, state-sponsored hacking of Western intellectual property is not considered a malicious activity in China.

There is the Chinese notion that everything is fair game in business and war and protecting company secrets falls on the shoulders of the cybersecurity sector.

To read more about the fallout in the West from China’s aggressive trade strategy, click here.

The concept that you should only blame yourself if you allow your secrets to get stolen prevails in China.

The consequences are impactful with U.S. chip companies suffering large drops in revenue without notice.

Leading up to the coronavirus, chip companies experienced a revenue slide of 12% in 2019 to $412 billion largely due to the trade war.

An example is Xilinx Inc. (XLNX) who will fire 7% of its workforce citing lower revenue from Huawei and delayed adoption of superfast 5G networks.

Along with the West getting smacked by the trade war, the ripple effect of increased uncertainty and guide-downs across the semiconductor supply stems from China’s economy being hit even worse than the U.S. economy.

There are no winners here and it will be a hard slog back from the nadir.

Either way, the sabre-rattling doesn’t stop here and each tweet and counterpunch will cause heightened volatility in chip shares.

Then consider that the existence of supply chains will most likely uproot, and we got indication of that type of activity with Taiwan Semiconductor’s (TSM) announcement to build a new chip factory in Phoenix.

To read more about this impactful deal then click here.

This would have never happened during prior administrations where all manufacturing was offshored to China.

As it stands, China has been circumventing existing U.S. law to clampdown chip sales by buying U.S. chips from 3rd party channels.

Once many of the supply chains come back, it will be almost impossible for Chinese to procure those same chips.

Building is slated for 2021 with production targeted to begin in 2024.

Moving forward, the U.S. administration will make it implausible for many U.S. chip companies to offshore using the reasons of national security and domestic job demand to ensure that many factories are rerouted back to U.S. shores.

The boom and bust nature of chip companies make for treacherous spikes and drops in share prices.

The insane volatility is why I stay away from them as the Mad Hedge Technology Letter mainly opts for short-term options trades.

Nvidia (NVDA) and AMD (AMD) are great individual chip stocks that I would encourage readers to buy and hold.

On the flip side, cloud stock’s backbone of recurring monthly revenue is just too savory.

The constant cash flow with minimal international risk along with pristine balance sheets is what makes U.S. cloud companies top on the list of trade alert candidates.

That won’t stop anytime soon as the pandemic has offered us more conviction into the moat between cloud stocks and the rest of technology.

I apologize if I sound like a broken record, but I love my Akamai’s (AKAM) and DocuSign’s (DOCU), they have the growth portfolio that backs up my thesis.

Buy cloud stocks on the dip. 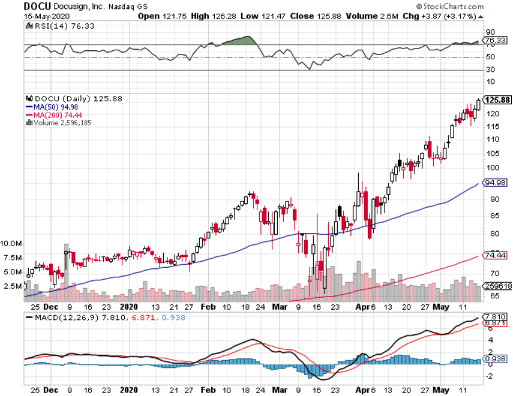 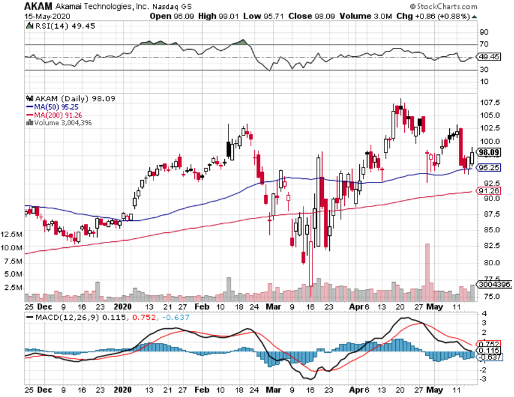 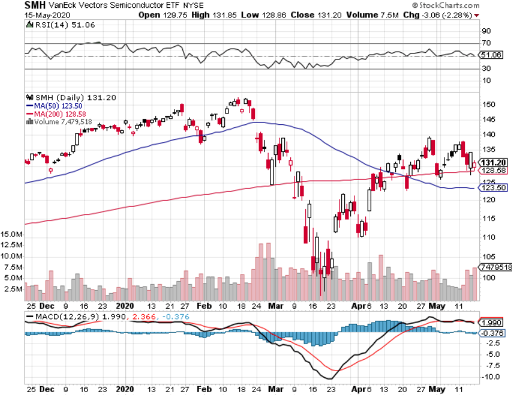