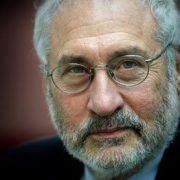 The great thing about interviewing Joseph Stiglitz over dinner is that you don?t have to ask any questions. You just turn him on and he spits out one zinger after another. And he does this in a kibitzing, wizened, grandfatherly manner like one would expect from a character that just walked off the set of Fiddler on the Roof. The unfortunate thing is that you also don?t get to eat. The Columbia University professor and former World Bank Chief Economist animatedly talked the entire time, and I was too busy feverishly taking notes to ingest a single crouton.

Stiglitz argued that for 30 years after the end of the Great Depression there was no financial crisis because a newly empowered SEC was on the beat, and everything worked. A deregulation trend that started under Reagan began stripping away those protections, with the eventual disastrous repeal of Glass-Steagle in 1999. The philosophical justification adopted by many economists, including Fed chairman Alan Greenspan, was that unfettered markets always lead to efficient outcomes.

This belief was based on simplistic models assuming that markets were always perfect, always open, and that everyone had perfect information. Stieglitz?s own work on ?information asymmetry,? which earned him a Nobel Prize in economics in 2001, pulled the rug out from under this theory, because it showed that one party to a transaction always has more information than the other, often the seller.

The banks used this window to introduce super leveraged derivatives that had never been regulated, studied, or even understood. They then clawed open accounting loopholes that were so imaginative that not only were shareholders and regulators deceived about how much risk was involved, senior management was clueless as well. Instead of managing risk, they created risk.

A 2006 GDP that was 80% derived from real estate transactions and a savings rate that fell to zero meant that a severe crash was a sure thing. President Bush?s response was to unleash an extreme form of ?trickledown? economics, with the banks given $700 billion with no conditions attached. Intended to recapitalize the banks so they could resume lending to the mainstream economy, much of the money ended up being paid out in bonuses and dividends. Of the $180 billion used to rescue AIG, $13 billion went to Goldman Sachs, and much of the rest went to German and French banks. No wonder Main Street feels cheated.

The financial system is now more distorted than ever, with major institutions wards of the state, and smaller banks that actually lend to consumers and small businesses going under in record numbers, because the playing field is so uneven. There are too many structural conflicts of interest. The ?once in a 100 year tsunami? argument is merely a justification for changing nothing. Banks would rather maintain the fiction that the loans on their books are good, than make adjustments, meaning there will be more foreclosures in 2012 than in 2010 or 2009. No financial system has ever wasted assets on this scale, and the end result will be a national debt many trillions of dollars larger.

The $787 billion stimulus package was too small, and should have been at least $1.2 trillion, but there was no way Obama was going to get more out of this Senate. The 40% of the stimulus that was tax cuts will get saved and create no immediate beneficial effects on the economy. More money should have gone to the states, which unable to deficit spend, are now a huge drag on the economy. But even this meager package was able to prevent the unemployment rate from rising from 10% to 12%, as it was set to do. The inadequacy of the first package means a second is almost a certainty. Any major spending cuts will produce ?Hoover? outcomes.

The outlook for the economy is bleak, at best.

Well, I don?t get to chat at length with a Nobel Prize winner every day, so I thought I?d give you the full blast, even though I had to leave a lot out. I?ll talk more about markets tomorrow.

The Final Word on the Volatility Index
Scroll to top