The inside story on the collapse of volatility is now out, and as a result, managers are reviewing the harsh lessons learned and tweaking their strategies. It highlights the dangers of buying securities without reading the prospectus and understanding what is under the hood.

As investors piled into stocks in February, they also bought downside protection in the form of the Velocity Shares Daily 2X VIX Short Term ETN (TVIX). For reasons that are yet to be explained, the issuer, Credit Suisse, arbitrarily decided to quit issuing new shares, effectively turning this vehicle into a closed end fund. Money poured in anyway, driving the price up to a 100% premium over the intrinsic value of the fund.

Then, out of the blue, Credit Suisse reversed its decision and decided to issue new shares after all last week. This could mean only one thing to the professional volatility trading community, which jumped on the (TVIX) with both feet. They took the ETF down a stunning 65% in a week, all the way down to a 20% discount to intrinsic value. During the same time, the (VXX) fell by 25%, while the (VIX) was up 10%. Now that?s a tracking error with a turbocharger!

It now appears that there was some advanced knowledge about the reissuance of shares, and the SEC is almost certain to make inquiries. Those who had hoped for downside protection in the stock market got a slap in the face instead. To say the least, confidence in the financial system has not been advanced.

To make matters worse, a major hedge fund based in Chicago has a gigantic position in the (TVIX) with a ?put tree?. This involved buying one $21 put and selling short one $18 put and three $17 puts. Below $17 they were 300% long the (TVIX). When the ETF broke that level, the sushi hit the fan, triggering panic selling of all (VIX) products at any price, including the unrelated (VXX). I can?t tell you who it is without risking litigation. But with the quarter end upon us, their investors will find out soon enough. Watch the newspapers to find out whom.

The debacle has sent analysts scurrying to find other ETF?s that may be trading at premiums to their underlying. Here are the top three:

The premium in the (UNG) frequently goes as high as 50% and results from the contango in the futures market, where far month contracts are trading at big premiums to the front month. That makes it a great shorting vehicle in falling markets, because the ETF always falls faster than the underlying. I have drunk at this well many times.

What happens from here? My guess is now that managers see that their downside protection is a sham, they won?t want to play. That could translate into stock selling, now that holders understand that these positions involved more risk than they realized.

In the meantime, if you plan on dabbling in the $1.4 trillion 1,400 issue ETF market, it may prove wise to check out the intrinsic value of any ETF before you buy it. You can do this easily by going to Yahoo Finance and adding .iv to any ticker symbol. So while the (TVIX) intrinsic value this second is at $7.51, the current market is at $7.96, a 6% premium. If you value your wealth, you might well get familiar with this exercise. 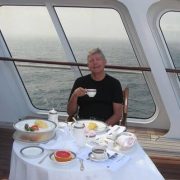 Buy Flood Insurance With the VIX