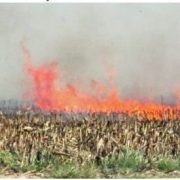 We are entering the dead period for agricultural products. The harvest is almost in. Any weather events we see from here on will affect next year?s crop more than this year?s. There are no more significant, market moving reports due out of the Department of Agriculture in the foreseeable future. And we enter the quite season close to a near doubling in prices, thanks to the worst draught in 50 years.

All of this adds up to a short volatility trade for the Teucrium Commodity Trust Corn Fund ETF (CORN).

(CORN) has its own downside kicker. If Obama gets elected, you can count on him to go after the ethanol subsidy, which everyone outside of Iowa can?t stand. Elimination of this $10 billion a year pork barrel project is one of the few issues that both parties agree on as part of any budget balancing effort.

Ethanol production consumes 40% of the total US corn crop. Even the World Bank has recently criticized the US for burning food and driving prices up for poor people around the world. End this massive subsidy, and (CORN) drops by half in a hurry.

The attraction of the November, 2012 $50-$55 in-the-money bear put spread is that it is short dated and limited risk. As long as (CORN) doesn?t blast through to a new all-time high by the November 16 expiration, we should be able to keep the maximum profit of $1,265, 1.27% for the notional $100,000 model portfolio. For all of the reasons that are listed above, that is a reasonable bet.

Keep in mind that I love (CORN) and the rest of the ag space for the long term. The higher temperatures delivered by global warming assures perennial food shortages for the rest of our lives. The world is making people faster than the food to feed them. Rising standards of living mean that emerging market populations, such as in China, can buy more food. There isn?t a second ?green revolution? on the horizon to bail us out, as we saw in the 1960?s. Oh, and the world is running out of fresh water too. This is just a short term trade to take advantage of the quiet period.

The best execution can be had by placing your limit order bid for the entire spread in the middle market and waiting for the market to come to you. The difference between the bid and the offer on these deep in-the-money spread trades can be enormous.

Don?t buy the legs individually or you will end up losing much of your profit up front. If you don?t get filled, then try cancelling your order and entering a new bid five cents higher. If this doesn?t work, then wait for the next Trade Alert. There will be many fish in the sea.

The same applies if, for any reason, you don?t understand this trade. Better to watch this strategy unfold on paper in the model portfolio before you try it with real money.

Keep in mind that these are ball park prices only. Spread pricing can be very volatile on expiration months farther out. These are the trades you should execute:

Not Such a Great Idea!