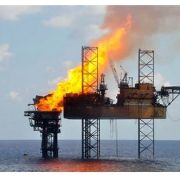 I love it. First, Israel?s right wing prime minister, Benjamin Netanyahu, call for a snap election. Many observers are viewing this as a referendum on war with Iran. Then, terrorists blow up the Iran-Turkey pipeline, a major 1 million barrel a day supplier to Europe. Next, we learn that US troops have been dispatched to our ally, Jordan, to prevent the Syrian civil war from spilling over there. Is this arpelude to an American invasion?

It was all enough to prompt a nearly $7 rally in west Texas intermediate oil. My response ? SELL! That?s why I bought the United States Oil Fund (USO) December $32.50-$35 bear put spread at $1.03 this morning.

Ben Bernanke has committed to buying $40 billion a month of mortgage backed securities as part of QE3, he has not promised to buy a single barrel of oil. This is bad for oil.

That means Texas Tea has to take the full brunt of collapsing demand caused by economies in Europe, China, and Japan that are in free fall. There are no bailouts here. On top of that, Saudi Arabia wants to whip some discipline into its fellow OPEC members.

It does this by permitting its own production to surge, dropping prices, and inflicting pain on recalcitrant cartel members, especially Iran. Around $80 a barrel is thought to be a price they would be happy with, some $14 a barrel lower than today?s price.

The failure of oil to pierce the 50 day moving average to the upside on the charts is thought to be particularly significant, reversing an uptrend that has been in place all week.

On top of all this is the never ending threat of a Strategic Petroleum Release by the administration that would cause prices to immediately gap down. It is safe to say that energy is not Obama?s favorite industry. He is essentially sailing ?Buy those $100 calls on oil at your peril, because I will render them worthless.? That is what he did will his jawboning campaign in the spring when crude threatened $107. Substantially tougher margin trading requirements for many commodities by the main exchanges quickly followed.

The final argument is that in the wake of QE3, there is a sudden death of ?RISK OFF? positions to trade against. Oil is almost one of the only ones out there. So an oil short will partially hedge out downside risk in the substantial ?RISK ON? positions we have built up in (GLD), (AAPL), (SLV) and (GOOG).

The extra turbocharger on this trade is that the hedge fund community is still hugely long oil, betting on an attack on Iran by Israel that never came. As we move into yearend, the pressure on them to dump their losers will be overwhelming. My friends in Israeli intelligence told me just yesterday that their country would take no action until next summer at the earliest, prefer to wait and see if US led economic sanctions against Iran work. Far and away the best thing for Israel to do here is nothing. That means you want to short every geopolitical event coming out of the Middle East for the foreseeable future by selling oil.

Keep in mind that these are ball park prices at best. The best execution can be had by placing your bid in the middle market and waiting for the market to come to you. The difference between the bid and the offer on these spread trades can be enormous. Don?t buy the legs individually or you will end up losing much of your profit up front. If you don?t get filled, then just wait for the next Trade Alert. The will be many fish in the sea. To execute this trade:

Suddenly, Oil is Not Looking So Hot!