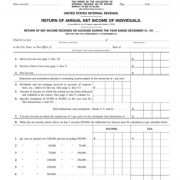 Some taxpayers have been sending birthday cards in with their tax returns this year. That?s because the International Revenue Service, the collector of America?s tax revenues, is 100 years old this week.

Although the wealthy have been paying income taxes since the 1861-65 Civil War, they did not apply to the rest of us until the passage of the 16th Amendment. The original form 1040, of which I have included a copy below, was one page long and imposed a starting tax rate of 1% over incomes of $3,000. The maximum tax rate was 7%. It included a deduction for shipwrecks.

When WWI broke out, that rate was taken up to 77%. Only 3% of the population had tax liabilities, compared to 54% today. Since 1913, the pages of instructions and deductions have soared from one to over 77,000. Today, some 6.6 billion man hours are spent preparing US tax returns. Talk about a growth business!

According to the Pew Research Center, 56% of Americans dislike taxes, but 71% feel they have a moral responsibility to pay what they owe. Yet, 34% say they pay more than their fair share of taxes, while 60% believe they are paying the right amount.

In 1775, the American Revolution first started as a tax revolt, with American merchants protesting the special exemptions enjoyed by British ones. That led to the Boston Tea Party whereby Americans masquerading as Indians dumped competing duty free imports overboard. Fairness of the system has been a recurring theme ever since. That is why Mitt Romney?s 13.9% tax rate was such a big deal in the 2012 presidential election.

About 1% of taxpayers are audited each year, with the wealthiest 12 times more likely to get audited than the middle class. Where are the residents least likely to be audited by the IRS? The Aleutian Islands in Alaska. And the most likely? Beverly Hills, California. Small businesses top the list, with those in the real estate and construction industries dominating.

The Justice Department brings about 1,000 criminal tax evasion cases a year. Jail times have only been required since 1987. That works out to one return out of every 150,000, so play audit roulette if you will. Their success rate in obtaining convictions is a mathematically impossible 98.5%.

What is the most common error committed on tax returns? Divorced parents both claiming the same children as dependents. The mistake is automatically caught by electronic filing with the earliest filer getting the tax savings. So don?t bother.

Now how much did I lose on that shipwreck last year?

Now What Line Does This Go On?

An Evening with Travel Guru Arthur Frommer
Scroll to top