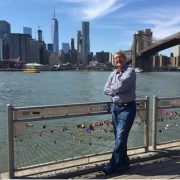 New York City was as alive as I have ever seen it. Maybe it was because it was the beginning of spring and the residents were venturing outdoors for the first time this year, their eyes blinking in the bright sunlight.

Old neighborhoods are gentrifying at an incredible rate. At this pace there won?t be any poor people left in Manhattan. I couldn?t get into the Tenement Museum because the tickets were sold out. That?s where tenements belong, in museums.

Instead of my usual ten-mile hike around the Tahoe Rim Trail, or up Berkeley?s Grizzly Peak, I hoofed it about Lower Manhattan and Brooklyn, and then back over the Brooklyn Bridge.

It was interesting to notice that the French custom of cementing a long term relationship by placing a lock on a public fence has spread to the Brooklyn riverside park. All culture is going global.

I made my ritual lunch stop at Katz?s Deli, the oldest such establishment in the country, and the location of the cult film, ?Where Harry Met Sally?. Nobody makes a better pastrami on rye, even if you have to wait in line a half hour to get one. 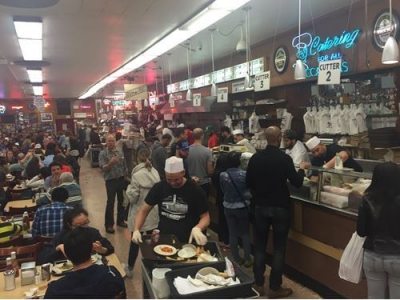 On my day off I made the long trek all the way up to visit the Franklin Delano Roosevelt Presidential Library and the Hyde Park Estate where he lived.

It is the best of the presidential libraries I?ve visited. In it I saw a letter from Albert Einstein urging him to start a nuclear program with the goal of building a massive bomb, dated August, 1939, just a month before WWII started.

I also saw a note handwritten by FDR to the Joint Chiefs of Staff ordering them to hold Guadalcanal ?at all cost.? Both my Dad and my Uncle Mitch were fighting on that hellish South Pacific island at the time. 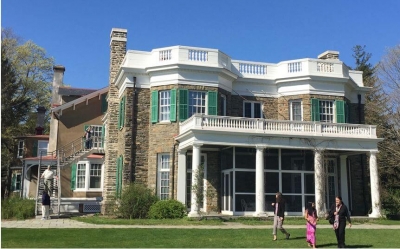 On the way home I stopped at the Vanderbilt mansion, the apex of Gilded Age consumption. Incredibly, there is no Vanderbilt fortune today, once one of the largest in the country. It was all spent.

The only money the Vanderbilt?s now have, such as Gloria and her son CNN reporter Anderson Cooper, they earned themselves.

On the flight to Chicago I sat next to an executive recruiter whose colleague specialized in the oil business. There is a total industry cleanout going on. CEO?s who were complete bastards two years ago have come back begging for jobs. Such is the price of hubris.

We spent much of my Chicago Global Strategy Luncheon discussing the future of the US commercial real estate business with a very intelligent group of people. I think it is one of the safest bets around, and will be a huge winner if my deflationary century scenario unfolds. Where else can you get double-digit returns and still take the paper home to meet your mother?

The big gossip in the Windy City was Hillary Clinton?s aggressive recruitment of a transition team, even though the election was still six months off. Apparently they want to hit the ground running.

At he University Club I listened in on the table next to me as a young African American women was interviewed and answered every question perfectly. She was whip smart.

Having traveled around the United States for a half century, I have noticed a few changes.

The regional accents are dying out, but the food is getting better. The cities have grown enormously, both upward and outward. Some 50 years of mostly nonstop prosperity accomplishes quite a lot.

We are all becoming much more diverse and educated, and far more demanding consumers. Unfortunately, we are a lot bigger too, creating the root of all our health care problems.

The star of the trip was the Uber ride sharing app. In a week I jumped in and out of cars 40 times, each vehicle clean and efficient. No hassles about payment, change, directions, or receipts. Maybe the company really is worth $65 billion.

As I sped down the tracks to New York at 70 miles per hour, I could see cars clustering at every station in New England. Amazing.

It?s all been another week in the life of the Mad Hedge Fund Trader. 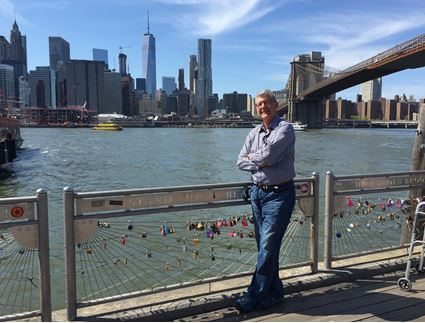