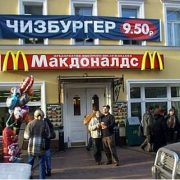 I can tell you exactly how the crisis in the Ukraine is going to play out. This has major implications for the global economy, financial markets and your personal portfolio, so listen up!

The key to deciphering this puzzle is oil, far and away Russia?s largest export. At 10 million barrels a day, the country is taking in $360 billion a year in revenues from oil shipments.

You can analyze Russia all day long, and come up with bullish arguments for the country, like the emerging middle class, its huge hoard of basic commodities, and substantial wheat exports. But Texas tea (Russian tea?) overwhelms everything else in its impact on the national accounts.

The bottom line is that Russia is basically a call option on oil. This is why I never buy the Market Vectors ETF Trust (RSX). Look at the charts below for oil, and it is clear that it almost trades tick for tick with the (RSX).

If I?m bullish on oil, I go straight to the end commodity, and not the intermediary, where price earnings multiples are permanently low, corruption is rampant and the rule of law is absent.

And therein lies the problem for Vladimir Putin.

Any chink in the global growth picture flows straight into the price of oil. Slower growth brings lower oil prices and therefore smaller incomes for the Russians. And guess who the principal threat to global growth is? Vladimir Putin and his attempt to take over the Ukraine by force.

So far, crude has dropped by 10% from the May peak of $107.60. That may not sound like a lot. But this is not your father?s Russian oil industry.

Back in the old days, when my friend, Occidental Petroleum?s (OXY) Dr. Armand Hammer and Fred Koch were the only Americans running around the Caucasus, oil there was incredibly cheap. There, technology was 50 years old and labor was virtually free. Slave labor is great for profit margins. If you don?t believe me, just ask Wal-Mart (WMT) and Apple (AAPL).

The fall of the Berlin Wall and the end of the Soviet Union brought many far-reaching, unintended consequences. A big one is that Russia?s dependence on international trade grew tremendously. The country was also able to modernize its oil industry with extensive American assistance.

Russian oil production exploded, as did the cost of production. In my lifetime, expenses have soared from $5 to $70 a barrel. So when oil dips by 10% on the international markets, Russian incomes plunge by 25%. The Russian oil industry has become a highly leveraged affair.

This is why such relatively minor price declines brought apparently desperate actions by the Russian authorities to prop up the economy. They have imposed a 3% emergency VAT, or sales tax. While I was in Europe, four Russian tour companies were driven into bankruptcy by the banking sanctions, stranding some 10,000 tourists on Mediterranean beaches.

Now there is a ban on food imports from Europe, stranding thousands of trucks at the Russian borders. Russia doesn?t grow much food, thanks to their horrendous winters and short growing seasons. Essentially, it?s just wheat and potatoes.

Everything else has to be imported. Some of the lost food can be made up with new imports from emerging, non sanctioning economies, but not much. In the meantime, some 350 McDonald?s franchises in Russia are trying to figure out how to make Big Macs purely from domestic supplies. Good luck to that!

The thing that really struck me speaking to Russians in Europe this summer was Putin?s unbelievably high 85% approval rating (our congress is at 14%!). They trotted out the most incredible conspiracy theories which painted them as the injured party. (The Ukraine was trying to assassinate Putin when it shot down Malaysian Air 17, and then blamed it on Russia).

It almost reminded me of home. The Russians are calling their opponents ?fascists.? This is a people who act like WWII ended last week.

Which leads me to believe that Putin?s popularity is peaking. The sanctions coupled with falling oil revenues are starting to have a severe impact on Russian standards of living. It is a matter of time before this feeds into poor election results for Putin. Nationalism is great, but who wants to live on canned food left over from the Soviet Union (yuck!).

Putin knows this. So to head off the riot, he is going to declare victory in the Ukraine fairly soon, and then take his troops home. This will enable the Ukraine to snuff out the separatists and return to an uneasy peace. We might even luck out and get a written treaty.

If that is a case, you can expect global financial markets to rocket. There would me a massive shift of capital out the risk spectrum, out of bonds and into stocks. This would give the green light for my scenario where S&P 500 adds 10% from last week?s low to end of 2014.

Maybe this is what stocks are trying to tell us by refusing to go down more that 5% this summer and the face of a host of geopolitical disasters.

As for the exact timing for all of this, just watch the price of oil. The lower it goes, the sooner we will get a favorable resolution. The charts are hinting that another $5-$10 break to the downside is imminent.

The last Cold War drove the Soviet Union broke and Putin definitely has no interest in repeating the exercise. 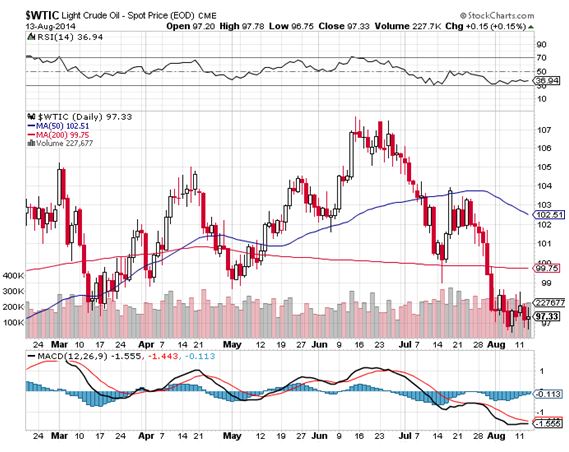 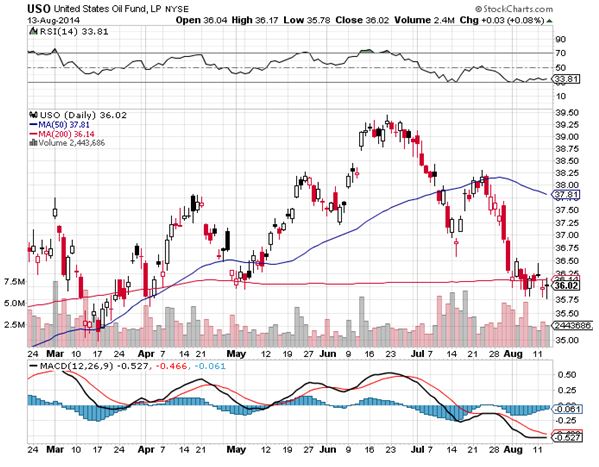 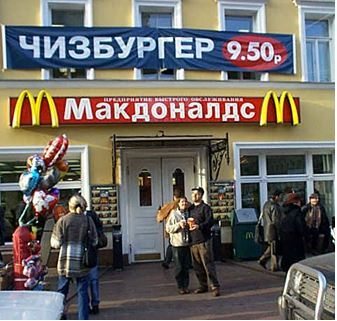 Not Until the Sanctions Are Over