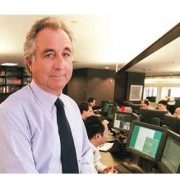 I spent a sad and depressing, but highly instructional evening with Dr. Stephen Greenspan, who lost most of his personal fortune with Bernie Madoff. The University of Connecticut psychology professor had poured the bulk of his savings into Sandra Mansky?s Tremont feeder fund; receiving convincing trade confirms and rock solid custody statements from the Bank of New York.

This is a particularly bitter pill for Dr. Greenspan to take, because he is an internationally known authority on Ponzi schemes, and published a book entitled Annals of Gullibility-Why We Get Duped and How to Avoid It. It is a veritable history of scams, starting with Eve?s subterfuge to get Adam to eat the apple, to the Trojan horse and the Pied Piper, up to more modern day cons in religion, politics, science, medicine, and yes, personal investments.

Madoff?s genius was that the returns he fabricated were small, averaging only 11% a year, making them more believable. In the 1920?s, the original Ponzi promised his Boston area Italian immigrant customers a 50% return every 45 days. My suspicious grandmother wisely passed on an invitation to join the plan.

Madoff also feigned exclusivity, often turning potential investors down, leading them to become even more desirous of joining his club. For a deeper look into Greenspan?s fascinating, but expensively learned observations and analysis, go to his website www.stephen-greenspan.com.

Play China?s Yuan From the Long Side