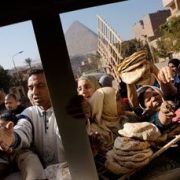 After my entertaining repast with the head of our nation?s intelligence service, I had to ask myself this question.

During the sixties, new dwarf varieties, irrigation, fertilizer, and heavy duty pesticides tripled crop yields, unleashing a green revolution. But guess what? The world population has doubled from 3.5 to 7 billion since then, eating up surpluses, and is expected to rise to 9 billion by 2050.

Now we are running out of water in key areas like the American West and Northern India, droughts are hitting Australia, Africa, and China, soil is exhausted, and global warming is shriveling yields. Water supplies are so polluted with toxic pesticide residues that rural cancer rates are soaring.
Food reserves are now at 20 year lows. Rising emerging market standards of living are consuming more and better food, with Chinese pork demand rising 45% from 1993 to 2005. The problem is that meat is an incredibly inefficient calorie transmission mechanism, creating demand for five times more grain than just eating the grain alone.

To produce one pound of beef, you need 16 pounds of grain and over 2,000 gallons of water! I won?t even mention the strain the politically inspired ethanol and biofuel programs have placed on the food supply. Burning food so you can drive your GM Suburban to Wal-Mart on the weekends while millions are starving never made much sense to me.

It is possible that genetic engineering, sustainable farming, and smart irrigation could lead to a second green revolution, but the burden is on scientists to deliver.

The amount of arable land per person has fallen precipitously since 1960, from 1.1 acres to 0.6 acres, and that could halve again by 2050. Water is about to become even more scarce than land. Productivity gains from new seed types are hitting a wall.

China, especially, is in a pickle because it has 20% of the world?s population, but only 7% of the arable land. It has committed $5 billion to develop agricultural land in Africa. There are now thought to be over one million Chinese agricultural workers on the Dark Continent. Similarly, South Korea has leased half the arable land in Madagascar to insure their own food supplies.

An impending global famine has not escaped the notice of major hedge funds. George Soros has snatched up 650,000 acres of land in Argentina and Brazil on the cheap, an area half the size of Rhode Island, Others are getting into the game, quietly building portfolios of farms in the Midwest and the South.

This year promises to deliver one of the greatest US crop yields in history, brought on by the warmest winter in 100 years. The US Dept. of Agricultural January crop report then predicted huge surpluses, slamming prices once again, and delivering limit down moves in the futures markets. But the weather may not cooperate, as it did last year.

The net net of all of this is that food prices are going up, a lot. Use this year?s expected weakness in prices to build core long positions in corn, wheat, and soybeans, as well as in the second derivative plays like Potash (POT), Agrium (AGU) and Monsanto (MON). You might also look at the PowerShares Multi Sector Agricultural ETF (DBA) and the Market Vectors Agribusiness ETF (MOO).

Please Use My Free Data Base Search