2) Japan’s Bill Is Now Due. Do the hard work and the accidents happen in your favor. This is what I have been hammering away with at my junior traders and analysts for decades. You won’t find a more clear illustration of this time worn maxim than Standard & Poors’ surprise of Japanese government debt last light, from AA to AA-.

No one has trumpeted from the roof tops Japan’s shortcomings louder than I. The world’s worst managed economy with the bleakest outlook and the lowest yielding currency boasts a debt to GDP ratio approaching an oxygen gasping 200%. Yet the country boasts the world’s strongest bond and currency markets, despite numerous efforts by the Tokyo government to torpedo them.

It couldn’t last forever. I predict that this is first of many more downgrades by Standard & Poors’ and others that are about to plague the Land of the Rising Sun. Expect this dismal prospect to feed into a weaker yen sooner than latter. Efforts to staunch bleeding deficits, such as through raising the national sales tax above 5%, will amount to a feeble Band-Aide solution at best.

It is just a matter of time before the global bond vigilantes tire of beating up on tired Europe and refocus their efforts on Japan, where the ten year government bond yields a laughable 1.23%. That is why I have been stubbornly persisting in my bearish call on the Japanese currency, recommending the double leveraged short ETF, (YCS). 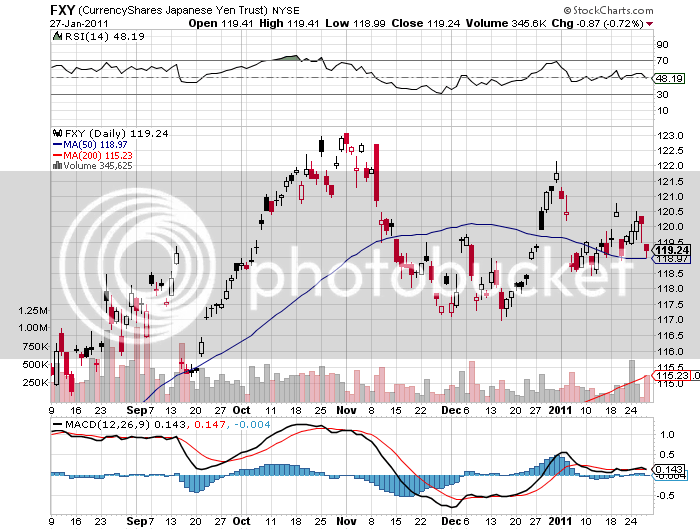