1) As much as I like to open beer bottles with my teeth, do my own tattoos, and roll around in the snow naked and beat myself with birch branches, when it comes to pain in my investment portfolio, I am definitely a wimp. So I have to take notice when a ?Golden Cross? occurs on one of the major indexes, as happened with the S&P 500 on June 23 when it hit 888. For the initiated, a ?Golden Cross? occurs when the 50 day moving average moves up through the 200 day moving average. Historically, this means that the index will rise 7% in the next three months, 8% in the next six, and 19% over the coming year. The trouble is that if technical analysts were always right, they would only wear Jon Green or Anderson & Sheppard suits, drive Bentley Turbo RT?s, and certainly wouldn?t deign to talk to you. The harsh reality is that most shop at Men?s Warehouse, drive Hyundai?s, and work on salary for brokers. If they were paid based on performance, there would be no need for Jenny Craig or Weightwatchers. Not that they are to be ignored. They are right at least half the time. But their opinions are just one more thing to throw into the decision making soup. 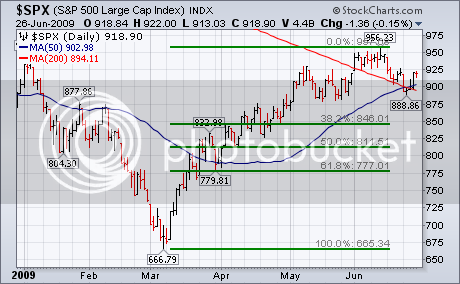 2) I spent the evening with Dr. Robert Frank, professor at the Cornell University School of Management, and author of The Economic Naturalist?s Field Guide. US consumer spending?? peaked at $10 trillion, or 73% of GDP in 2000, and in the new world of falling incomes and enforced savings rates, it will take many years to come back. The current disaster was a guaranteed outcome, because while incomes stagnated over the last 30 years, the median home size jumped 50% to 2,600 square feet. Deregulation poured gasoline on the fire, enabling an unsustainable culture of leverage. California is in a real pickle, because governor Arnold Schwarzenegger is forced to act as Herbert Hoover did by balancing a budget while falling into a Depression. Dr. Frank argues that we should use this economic crisis to fundamentally remake the US tax system. The current system taxes savings on multiple levels, but spending is tax free. We need to scrap the income tax (three cheers), and implement a steeply progressive consumption tax. We need to tax pollution the same way. Dr. Frank, who co-authored a previous book with Fed governor Ben Bernanke, offers radical solutions. It seems that desperate times require desperate measures.

3) If you think that the upcoming energy shortage is going to be bad, it will pale in comparison to the next water crisis, so investment in fresh water infrastructure is going to be a recurring long term investment theme. (See my earlier efforts to get you into the water space). One theory about the endless wars in the Middle East since 1918 is that they have really been over water rights. Although Earth is often referred to as the water planet, only 2.5% is fresh, and three quarters of that is locked up in ice at the North and South poles. In places like China, with a quarter of the world?s population, up to 90% of the fresh water is already polluted, some irretrievably so. Some 18% of the world population lacks access to potable water, and demand is expected to rise by 40% in the next 20 years. Aquifers in the US, which took nature millennia to create, are approaching exhaustion. While membrane osmosis technologies exist to convert sea water into fresh, they use ten times more energy than current treatment processes, a real problem if you don?t have any, and will easily double the end cost to consumers. While it may take 16 pounds of grain to produce a pound of beef, it takes a staggering 2,416 gallons of water to do the same. The UN says that $11 billion a year is needed for water infrastructure investment, and $15 billion of the US stimulus package will be similarly spent. It says a lot that when I went to the UC Berkeley School of Engineering to research this piece, most of the experts in the field had already been retained by major hedge funds! At the top of the shopping list to participate here should be the Claymore S&P Global Water Index ETF (CGW), which has appreciated by 32% since I first brought it up. You can also visit the PowerShares Water Resource Portfolio (PHO), the First Trust ISE Water Index Fund (FIW), or the individual stocks Veolia Environment (VE), Tetra-Tech (TTEK), and Pentair (PNR). Who has the world?s greatest per capita water resources? Siberia, which could become a major exporter to China in the decades to come. 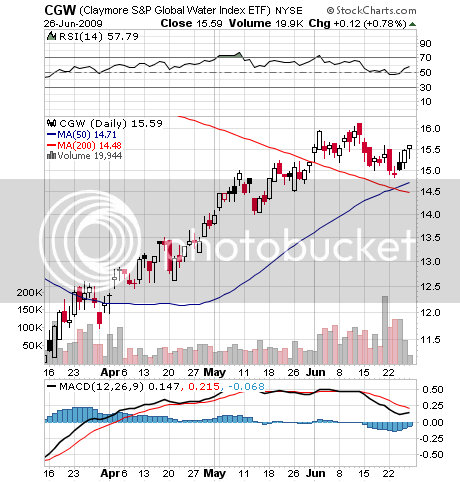 4) It appears that my website was one of the few that did not crash on news of the death of Michael Jackson. I wonder why? Twitter survived its first serious crash threat when traffic spiked to 65,000 tweets a second. AT & T?s network did less well, and almost came down. That?s better than Google?s search engine, which temporarily froze. Yahoo says they got the greatest number of clicks on a news story in its history. The Internet was built to survive a nuclear war, but was taken down by the passage of a drug addicted musician. You would think that the copyright holder on the Jackson titles, Sony (SNE), would do well, but not so. Instead, Amazon (AMZN) stock took off, offering for sale the top ten selling Jackson CD?s by the King of Pop. Most of them sold out in a day. I guess it?s a new world out there. Those with the best selling machine, win. Our local winner? Butler Amusements bought four carnival rides at a Neverland Ranch auction last year, and these can be ridden today at the Alameda County Fair. Talk about a windfall!

?If 1.4 billion people suddenly decide to spend an extra dollar a day, it will have a massive impact on what?s going on in the world,? said Andy Brough, a fund managers at Schroeder?s, about Chinese efforts to stimulate domestic consumption.