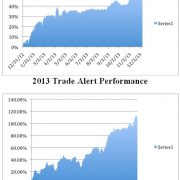 The performance of the Mad Hedge Fund Trader?s Trade Alert Service is still going ballistic, reaching the heady height of 63.08% for the year.
Including both open and closed trades, 24 out of the last 26 consecutive Trade Alerts have been profitable. The results so far in December are up a stunning +7.04.

The three-year return is an eye popping 118%, compared to a far more modest increase for the Dow Average during the same period of only 32%.
That brings my averaged annualized return up to 39.3%.

This has been the profit since my groundbreaking trade mentoring service was launched three years ago. It all is a matter of the harder I work, the luckier I get.

I held on to every risk on position during the two-week December correction, fully expecting the pause to become the springboard for a new run to all time highs by year-end. That is exactly what happened in the wake of the Federal Reserve?s decision to taper its quantitative easing program by only $10 billion a month, mere sofa change given the size of our bond market.

That sent off to the races my long positions in the Financials Select Sector SPDR (XLV), the S&P 500 (SPY), and Internet giant Softbank (SFTBY). I cashed in one of my three short positions in the Japanese yen (FXY), which broke to new multiyear lows. I kept my shorts in the Treasury bond market (TLT), which crashed. I?ll double up here on the next rally.

It looks like I still have room to take in a few more percentage points in profits before 2014. Japan should explode to the upside tonight, where I am maintaining a hefty 40% weighting in my model trading portfolio. My followers will spend New Years laughing all the way to the bank.

This is how the pros do it, and you can too, if you wish.

Carving out the 2013 trades alone, 77 out of 92 have made money, a success rate of 83%. It is a track record that most big hedge funds would kill for.

My esteemed colleague, Mad Day Trader Jim Parker, has also been coining it. Since April, his own performance numbers have just come back from the auditors, revealing that he is up a staggering 279%.

The coming winter promises to deliver a harvest of new trading opportunities. The big driver will be a global synchronized recovery that promises to drive markets into the stratosphere in 2014. The Trade Alerts should be coming hot and heavy. Please join me on the gravy train. You will never get a better chance than this to make money for your personal account.

Global Trading Dispatch, my highly innovative and successful trade-mentoring program, earned a net return for readers of 40.17% in 2011 and 14.87% in 2012. The service includes my Trade Alert Service and my daily newsletter, the Diary of a Mad Hedge Fund Trader. You also get a real-time trading portfolio, an enormous trading idea database, and live biweekly strategy webinars. Upgrade to?Mad Hedge Fund Trader PRO?and you will also receive Jim Parker?s?Mad Day Trader?service.

I was Wrong…But it Didn?t Matter