1)The imminent demise of General Motors (GM) will be a nail in the coffin for the commercial real estate market, which I believe will be the financial crisis of 2009. Some 2,000 dealers are being axed, dumping hundreds of millions of square feet on to a market that least wants it. These were the guys who sponsored the local baseball team and Girl Scout cookie sales, and their absence will rip the hearts out of hundreds of American communities. Much of this is prime space, near dense populations, with great frontage, adjacent retail space, completed site work, mitigated environmental work, and already zoned for commercial use. Some might get turned into mini malls, but I’m afraid more will end up as indoor climbing walls and paintball battlefields. Commercial real estate sales are off 73% this year, while vacancies have catapulted to 16.7%. Banks have seized 464 properties so far in 2009, including $7 billion worth in March alone, and thousands more are on the brink.

2) If you are not a captain on a bridge somewhere, ready with orders to repel boarding pirates with fire hoses, you might be forgiven for being unaware that the Baltic Dry Shipping Index ($BDI) has gone up an unbelievable 20 days in a row. This market for bulk cargo charter rates made investors seasick last year when the near complete shutdown of international trade and a cessation of credit took the index down a mind boggling 94%, from 12,000 to 650. At that level, the market was pricing in a probability that no ship would ever sail anywhere again, and that the global fleet would permanently rust at anchor. A slow thawing of credit has drawn in some hot money that has taken the BDI back up to 3,400, a handy 560% gain in six months. It has also been matching the revival of commodity markets tick for tick. The chart below looks like crude with a turbocharger. In additional to being a favorite topic to impress friends with at dinner parties, the BDI has also become a favorite of the ‘green shoots’ crowd as proof that the world is not going to end after all. After so many things have had great runs, there are a lot of charts that look like this now (Crude, FXI, etc.). This one is just the most extreme.

3) The Athens based, Dry Ships Inc (DRYS), which operates a fleet of 40 coal and iron ore carriers, has done almost as well. After my call to buy it in December at $4, after a crash from $110, it popped to $18, and currently is churning around $7. The company launched three equity fund raisings since then, bringing in over $1 billion to pay off debt. It slashed operating expenses, cancelled orders for new ships, and wrote off defaulted charter contracts.?? The always colorful CEO George Economou, says he now has $1.67 billion in cash and is prowling for takeover targets. Keep this great trading vehicle on your radar screen as a supper leveraged call on the recovery of the global economy. 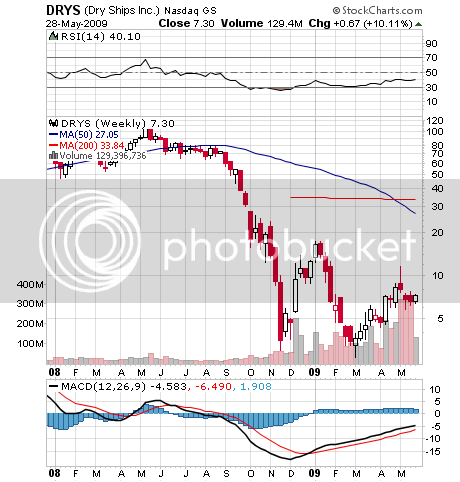 4) I met with my congresswoman last night, Ellen Tauscher of the 10th district, on her way to Senate hearings for her appointment as Undersecretary of State for rms Control and International Security. Helen started out life on Wall Street at the old Bache & Co. as one of the first female members of the NYSE, became an entrepreneur, and spent the last 13 years in congress overseeing all things nuclear (‘If I told you the details I’d have to kill you’).?? It looks like Obama is going to adopt Teddy Roosevelt’s approach to foreign affairs of ‘walk softly, but carry a big stick.’ ‘There’s a better way to do it than just offering up our military,’ she said. ‘We want to go back to the high ground on the nuclear issue,’ she continued, which meant restarting the destruction of some of our stock of 5,000 weapons already agreed to by treaty with the Russians. Her new responsibilities will include nuclear, biological, and chemical weapons control, the monitoring of nuclear power plants, treaty compliance, and the reigning in of Iran and North Korea’s nuclear ambitions. On the financial bailout bill, for which she voted, she opined, ‘If your neighbor’s house is on fire, it’s in your self interest to do something about it.’ She thinks that California has a nonworking government model that needs a constitutional convention to fix. The Republican Party has marginalized itself by sacrificing its moderates for the sake of ideological purity. That is what prompted Senator Arlen Specter to change parties. Good luck working for Hillary at Foggy Bottom.

‘Cheap is not a sufficient condition in which to invest in these times. It has to be combined with credit worthiness,’ said Marty Whitman of the Third Avenue Funds