Armed with the best management and stickiest tech products in the U.S., Microsoft (MSFT) has shown why every tech investor needs to own shares.

We just took profits from deep-in-the-money MSFT bull call spread and I’d be looking to get back into this name on any and every dip.

This tech company is unstoppable and the data underpinning their greatness reaffirms my point of view.

Microsoft said that 2 years of digital transformation has happened in the past 2 months.

The health crisis has shown that consumers cannot function without Microsoft and that will help fend off the regulatory monkey off their back.

Tech companies have had to reduce their future projections as the health scare has done great damage to consumer demand with many pulling guidance completely.

Overall, tech companies were locked in for a 5% earnings decline which was the best out of any industry, but they are coming in higher than that.

That was really all you need to know about Microsoft who possesses services that consumers can never get rid of.

Everything else is just a cherry on top.

To get into the weeds a little, Azure cloud-computing business and Teams collaboration software, have become mainstay products as workers are forced to stay home and their companies need computing power and tools to support them.

Many of those products are bundled with ones that may not fare as well, however — for instance, Microsoft combines revenue from on-premises server sales with its Azure business.

The “Intelligent Cloud” segment that includes Azure rose to $12.28 billion in sales from $9.65 billion a year ago, beating the average analyst prediction of $11.79 billion.

“Productivity & Business Solutions,” which comprises mostly of the cloud software assets, including LinkedIn, grew to $11.74 billion from $11.52 billion a year ago, beating analyst predictions of $11.53 billion.

The most important nugget awaiting the masses was forward guidance.

Microsoft expects continued demand across Windows OEMs, Surface and Gaming to shift to remote work play and learn from home.

The outlook assumes this benefit remains through much of Q4, though growth rates may be impacted as stay-at-home guidelines ease.

Reduced advertising spend levels will impact search and LinkedIn and the commercial business.

A robust position in durable growth markets means Microsoft expect consistent execution on a large annuity base with continued usage and consumption growth.

LinkedIn will suffer from the weak job market and increased volatility in new, longer lead-time-deal closures.

A sign of strength and a pristine balance sheet was when Microsoft signaled that they could absorb higher costs by saying, “a material sequential increase” in capital-expenditure spending in the current quarter will “support growing usage and demand for our cloud services.”

Even best tech companies have mostly been trimming capex and freezing hiring in anticipation of weaker revenue targets.

I knew when Google announced 13% annual sales growth and Facebook saying that ad revenue “stabilized” meant that Microsoft would only do better.

The tech market had priced Microsoft doing quite positively which is why shares did not rocket by 8%.

Microsoft is not a one-trick pony like Google and Facebook either and simply doesn’t need a potential vaccine to boost sales moving forward.

They preside over a vast empire of diversified assets with even a growth lever in streaming platform YouTube.

Even if LinkedIn and the hiring that fuels it will suffer, the rest of its portfolio will keep churning out revenue in literally any type of economic environment.

Lastly, the tech market has been utterly cornered by policymakers who, according to the IMF, have thrown $14 billion of liquidity with a chunk of that following through into big tech shares.

The level of propping up from the Fed cannot be understated and their behavior feels as if there is no way anyone could ever be underweight Microsoft because of the Fed’s unlimited balance sheet.

On top of that, we are getting a steady stream of positive health reports in the form of antiviral medication Remdesivir and who knows when the next positive announcement will come.

To cap it off -they are led by the best CEO in the U.S. Satya Nadella, who is an expert on the cloud, and this company has to either be the best or second-best company in the country along with Amazon. 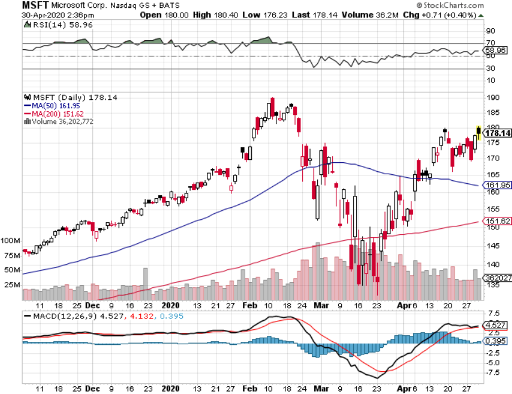