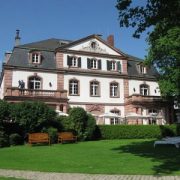 Taking the express train from Paris to Frankfurt, I was playing around with the map function on my iPhone 4s. It was really cool watching the blue dot marking my location zip across the map at 200 miles per hour.

When I zoomed in on my location, I realized that I recognized many of the names. Soissons, Chateau, Thierry, and Belleau Wood were all names that I recalled from my grandfather?s US Army discharge papers from WWI. That?s where he suffered a mustard gas attack that inflicted total blindness for 5 years and put him in a bad mood for the next 50. The train was traveling along the frontline trenches of the Western Front.

I wondered what my grandfather would say to me today, 45 years after his passing. His parents sent him from his native Sicily to New York City to avoid the Italian draft, which then needed recruits to expand its empire in Libya and Ethiopia. But when 1917 came, he joined the American army?s famed Rainbow Division to gain US citizenship and quickly found himself in the trenches.

I am sure he would be amazed by the technology that emerged nearly 100 years into the future; bullet trains, cell phones, and laptop computers that give immediate access to all knowledge. He was a true renaissance man, spoke five languages, and was well versed in the classics, so he would have appreciated the utility of such devices.

However, he would have been horrified that I was traveling to Germany to speak with the hated ?Bosch?, who committed atrocities against Belgium children, whose submarines sank unarmed civilian ships, and who were no better than lowly ?Huns?. That, however, is precisely where I was going, to advise the German government, the CEO?s of top corporations, and officials from the Bundesbank on how to extricate themselves from their current financial and political predicaments.

Check Out My Frankfurt Digs

When I arrived at Frankfurt station, my origins as a German blue-collar factory worker made themselves abundantly clear. I headed straight for a fast food stand and ordered a bratwurst mit brutchen und kartofelsalat mit eine grosse bier. When I was 16, I spent a summer working at the Sarotti chocolate factory in West Berlin, and the preferences I picked up live with me today. Some of my co-workers had been Russian POW?s in Siberia released only a few years before, and the stories they told me were bone chilling.

When the list of those who wished to hear my views became impossibly long, I finally said to one friend, ?Why don?t we just get everyone together and have one big party.? And that?s exactly what he did. Crammed into the top floor of one of Frankfurt?s highest skyscrapers were 100 of the cream of the German establishment who came to hear my thoughts on the world at large.

I told them that Europe has two choices: it can move backward or forward. If it returns to the past, the European Community and its currency will break up, forcing each country to compete individually against the US and China. This would cut GDP growth by half and lead to a permanent decline in standards of living. Germany would lose all of its banks as they go under en masse from the burden of bad European debts. Eventually, you would end up with a Germany that is angry, broke, and nuclear, and nobody wants that.

Inventory is Not Flying Off the Shelf in Europe

The only choice, then, is to move forward. Europe is really half a country, or a pretend country. It has a common currency, but not the institutions to ensure its survival, like a US style Treasury Department and a dual mandate central bank with teeth. The present system as it stands is guaranteed to fail. But it took a Herculean effort to get this far 13 years ago, with every party expending their last centime of political capital. So here we stand. After a long hiatus, it is now time to move forward.

It?s up to Germany to bail out the weaker economies of Southern Europe. For a start, they have the money to do so. Much of this was earned exporting German products there. Last year exports exceeded $1 trillion, or about 20% of GDP. Complain all you want about Mediterranean borrowing, but a very large part of it was used to buy Mercedes, Volkswagens, BMW?s, and Audi?s. That?s a lot of money to put at risk by allowing their economies to implode.

Research Can Be So Tedious

But bailouts don?t come free, and the quid pro quo for riding to the rescue would be to give Germany control of European monetary policy. The president of the ECB doesn?t even need to be a German. A Belgian would do, as long as he pursues German style anti-inflationary policies.

There are plenty of historical precedents for such arrangements. The US put up the money for the creation of the United Nations in 1945, and kept for itself a permanent seat on the Security Council. The US funded World Bank is always run by an American. The originally US financed International Monetary Fund has traditionally been managed by a European. The current president is former French Finance minister Christine Lagarde. But its headquarters are in Washington DC.

Pulling this off isn?t going to be easy. When the United States wrenched these concessions out of 13 states in 1787, only 5% of the population was allowed to vote?white, property owning males. Good luck trying to achieve that in a loose confederation of 27 states, with 17 in the monetary union that backs the Euro. Some politicians may have to actually earn their pay for a change. I expect this to be a five-year work out, at the very least.

The net net for all of this is that the Euro will get a lot cheaper before we hear the end of this. Parity against the greenback by next year is within reach, and a revisit to the old low of 88 cents is not impossible. Such a bargain currency would give Europe a huge economic advantage on the world stage and might even provide the grease to make an ultimate solution possible. Then we will have a real United States of Europe to be admired, but also feared as a real competitor.

With that, I headed off to a late dinner near the grand Frankfurt Opera House with several of the more senior guests. My host explained that the impressive baroque building was symbolic in Germany in many ways. While it looks ancient and imposing, it in fact was new, rebuilt with modern reinforced steel and concrete on the rubble of WWII.

Powered by beer, Rhine wine, and ultimately schnapps, I made it until midnight and then caught a taxi back to my palace, wondering if I had missed anything that evening. I also wondered if my grandfather would have been proud of me.