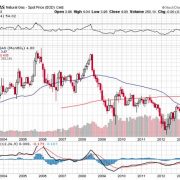 Four years ago, the dreams of a nuclear renaissance seemed close to coming to fruition. President Obama supported it. Congress passed a raft of new subsidies, tax breaks, liability caps, and cost overrun indemnifications, to grease the works. The goal was to bring the private sector back in a non-oil, non-carbon energy source which had seen no new construction in 34 years.

For a while, things were looking good. The Nuclear Regulatory Commission was flooded by 24 new applications for plants to join America?s 104 existing ones, from utilities largely in the southeast. Then a development far more devastating than the most egregious environmentalist lawsuit stopped the movement dead in its tracks. The price of natural gas crashed (UNG).

In 2008, CH4 peaked at $14/MM btu in 2008 in the wake of the last big oil spike to $149. It then utterly collapsed to $1.90, a vaporization of 86%. It was like someone snuffed your pilot light, turned all you gas burners on, and let your house blow up. Much of the industry was decimated, and gas investors got wiped out in droves. It also became one of my favorite short plays. Although gas has since recovered to $4/MM btu, it has completely demolished the economics of new nuclear.

It?s not like gas is going away anytime soon. Over the last five years, a new 100-year supply has been discovered in the US. Another 100 years is there, but exploration companies basically quit looking. What?s the point, when you are already drowning in the stuff. It turns out that about half of the land area of the United States is sitting on an exploitable natural gas field.

The finds assure US energy independence within 3-5 years, and will change the economy beyond all recognition. The risk is that gas gets cheaper, yet again, rather than ease nuclear?s competitive predicament. Just to bring nuclear back to even, gas has to roar back to $10/btu

The utilities have read the writing on the wall and are scrambling to lose their plans behind the radiator, post haste. Duke Energy (DUK), the poster child for new nuclear, has said it is calling off plans to build six new behemoths. Dominion Resources (DRU), in Wisconsin, is closing a nuclear plant which still has 20 years remaining on its license because it is simply too expensive to run. NRG Energy (NRG) dumped plans to build two Texas plants after blowing $331 million on preliminary planning and applications.

The new malaise in nuclear has placed a giant black cloud over the sector?s beleaguered ETF?s, including Market Vector Uranium + Nuclear Energy ETF (NLR) and Cameco (CCJ). Not only did these securities get the stuffing knocked out of them in the wake of Japan?s Fukushima tsunami and nuclear disaster, they have also suffered from this year?s general antipathy towards commodities.

I always had my misgivings about the return of big nuclear, the constructions of plants based on 50-year-old designs. There are too many other intelligent ways to do this from an engineering point of view. On the short list are alternative, cooler, non-weaponizeable fuels, like thorium. Small, modular, and even portable designs that mitigate and distribute risk is another idea. We may have to wait a while until better, more competitive nuclear strategies hit the market.

In the meantime, there are too many better fish to fry. Shop elsewhere.

What?s the Market for a Half Built Nuclear Plant?

Make Your Next Killing in Africa