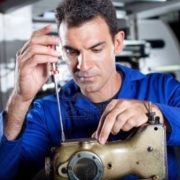 Have you tried to hire a sewing machine operator lately?

I haven?t, but I have friends running major apparel companies who have (guess where I get all those tight fitting jeans?).

Guess what? There aren?t any to be had.

Since, 1990, some 77% of the American textiles workforce has been lost, when China joined the world economy in force, and the offshoring trend took flight.

Now that manufacturing is at last coming home, the race is on to find the workers to man it. Welcome to onshoring 2.0.

The development has been prompted by several seemingly unrelated events. There is an ongoing backlash to several disasters at garment makers in Bangladesh, the current low cost producer, which have killed thousands.

Today?s young consumers want to look cool, but have a clean conscience as well. That doesn?t happen when your threads are sewn together by child slave laborers working for $1 a day.

Several firms are now tapping into the high-end market where the well off are willingly paying top dollar for a well-made ?Made in America? label.

Look no further than?7 For All Mankind, which is offering just such a product at a discount to all recent buyers of the Tesla Model S-1 (TSLA), that other great all American manufacturer (click here for their website).

As a result, wages for cut and sew jobs are now among the fastest growing in the country, up 13.2% in real terms since 2007, versus a paltry 1.4% for industry as a whole.

Apparel industry recruiters are plastering high schools and church communities with flyers in their desperate quest for new workers. They advertise in languages with high proportions of blue-collar workers, like Spanish, Somali, and Hmong.

New immigrants are particularly being targeted. And yes, they are resorting to the technology that originally hollowed out their industry, creating websites to suck in new applicants.

Chinese workers now earn $3 an hour versus $9 plus benefits at the lowest paying US factories. But the extra cost is more than made up for by savings in transportation and logistics, and the rapid time to market.

That is a crucial advantage in today?s fast paced, high turnover fashion world. Some companies are even returning to the hiring practices of the past, offering free training programs and paid internships.

By now, we have all become experts in offshoring, the practice whereby American companies relocate manufacturing jobs overseas to take advantage of low wages, missing unions, the lack of regulation, and the paucity of environmental controls.

The strategy has been by far the largest source of new profits enjoyed by big companies for the past two decades. It has also been blamed for losses of US jobs, with some estimates reaching as high as 25 million.

When offshoring first started 50 years ago, it was a total no brainer.? Wages were sometimes 95% cheaper than those at home. The cost savings were so great that you could amortize your total capital costs in as little as two years.

So American electronics makers began flying overseas to Singapore, Thailand, Hong Kong, Taiwan, South Korea, and the Philippines. After the US normalized relations with China in 1978, the action moved there and found that labor was even cheaper.

Then, a funny thing happened. After 30 years of falling real American wages and soaring Chinese wages, offshoring isn?t such a great deal anymore. The average Chinese laborer earned $100 a year in 1977.

But wages won?t have to reach parity for onshoring to accelerate in a meaningful way. Investing in China is still not without risks. Managing a global supply chain is no piece of cake on a good day. Asian countries still lack much of the infrastructure that we take for granted here.

Natural disasters like earthquakes, fires and tidal waves can have a hugely disruptive impact on a manufacturing system that is in effect a finely tuned, incredibly complex watch.

There are also far larger political risks keeping a chunk of our manufacturing base in the Middle Kingdom than most Americans realize. With the US fleet and the Chinese military playing an endless game of chicken off the coast, we are one mid air collision away from a major diplomatic incident.

Protectionism constantly threatens to boil over in the US, whether it is over the dumping of chicken feet, tires, or the latest, solar cells.

This is what the visit to the Foxcon factory by Apple?s CEO, Tim Cook, was all about. Be nice to the workers there, let them work only 8 hours a day instead of 16, let them unionize, and guess what?

Work will come back to the US all the faster. The Chinese press was ripe with speculation that Apple induced reforms might spread to the rest of the country like wildfire.

Former General Motors (GM) CEO, Dan Akerson, told me his company was reconsidering its global production strategy in the wake of the Thai floods.

Which car company was most impacted by the Japanese tsunami? General Motors, which obtained a large portion of its transmissions there.

The impact of a real onshoring move on the US economy would be huge. Some economists estimate that as many as 10%-30% of the jobs lost to offshoring could return. At the high end, this could amount to 8 million jobs. That would cut our unemployment rate down by half, at least.

It would add $20-60 billion in GDP per year, or up to 0.4% in economic growth per year. It would also lead to a much stronger dollar, rising stocks, and lower bond prices. Is this what the stock market is trying to tell us by failing to have any meaningful correction for the past 2 ? years?

Who would be the biggest beneficiaries of an onshoring trend? Si! Ole! Mexico (UMX) (EWW), which took the biggest hit when China started soaking up all the low waged jobs in the world.

After that, the industrial Midwest has to figure pretty large, especially gutted Michigan. With real estate prices there under their 1992 lows, if there is a market at all, you know that doing business there costs a fraction of what it did 20 years ago.

So How Does This Thing Work?