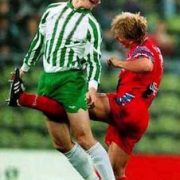 I am sitting here on Easter weekend sifting through pages and pages from the various technical programs I follow warning that the roof is about to cave in on the stock market. Friday?s nonfarm payroll bombshell was dropped right at a key, make or break level for the S&P 500 and the Dow Average. Hold here, and we grind to a marginal new high in weeks. Fail, and it is all over this year but for the crying.

The action in the futures market immediately after the release of the dismal numbers showed that the outcome of this contest has already been decided. S&P 500 futures gapped down from plus 4 points to down 15 points in minutes. The Dow saw a net swing of a gut churning 170 points. Ten year Treasury yields gapped down from 2.22% to 2.08%. The safe haven dollar soared against the euro. It was all, yet again, another harsh lesson on why you don?t take big positions before monthly nonfarm payroll figures, and why you should never listen to the ?experts?.

I couldn?t be more amused watching analysts? reactions to the figures on TV, who had been forecast as high as 250,000 and noticeably blanched when the flash hit the screen. In fact, this is one of the biggest head fakes that I have seen in sometime. The Thursday weekly jobless claims hit a four year low only the day before, pointing followers to the exact opposite direction. So did Canadian job gains, which hit a 30 year high for the month. Extrapolate that to the US and we should have seen of blistering gain of 750,000, not the feeble 120,000 we got.

It looks like the good winter weather bump we saw in February disappeared after possibly pulling as many as 50,000 jobs forward from the spring, generating the great payroll number for the previous month. That explains why the February correction in the market I had been expected never showed.

These unwelcome developments call into question the survival of the entire 35% bull move. It will be very interesting to see how many traders flip to sell every rally mode this week after spending the last six months buying every dip. Watch Apple. It will be key. So will the raft of data releases about the Chinese economy, which will be tricking out every night this week.

I was hoping for a healthy payroll number on Friday to give us a nice two day rally which I could use to reestablish my short positions. At least I covered my yen short, which is also bouncing hard. Now I have to decide if I want to sell into the dip. Welcome to show business.

The Payroll Figures Did Not Come in as Expected